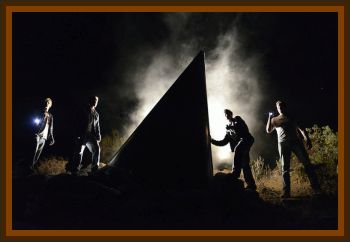 A field investigator for the Aerial Phenomena Research Organization, APRO, has determined a sighting by 14 persons here is bonafide, and may have been a robot controlled disk.

Mrs. Paula Holmes, president of the Northwest Connecticut Chapter of APRO, studied the sighting scene on Blueberry Hill and recorded statements of the eyewitnesses.

14 young hikers of Camp Delaware, including a 24 year old counselor, said they encountered a whining, saucer-shaped object during an afternoon hike on the 1,460' hill about 3:45 p.m.

Mrs. Holmes’ investigation indicated there were no imprints in the ground, torched vegetation or residues, no electro magnetic interference evident, broken branches or other traces to signify the unusual presence.

She said the hikers did not suffer from radiation or any other physiological effects.

All 14 statements match, however, with one discrepancy. Counselor Ira Leifer said the silvery, metallic object was rotating as evidenced by changing reflections on its surface. The other campers, aged 14 and 15, said only a red, dome shaped top was moving.

The investigator, who resides in Cornwall, said reports are consistent that the object was noticed following a high pitched screech, then hovered silently at tree top level on an angle above the witnesses’ heads.

The noise returned after about 15 to 25 seconds then the object ascended vertically and disappeared within two seconds, faster than anything they had ever seen.

Copies of the report are being sent to APRO headquarters in Tucson, AZ, The Center for UFO studies in Evanton, IL, and the Midwest UFO Network, for scrutiny.

Scientific chemical analysis and radiation detection devices were not used in the area of the sighting because the object was not spotted close enough to the Earth’s surface, Mrs. Holmes said.

Mrs. Holmes said she can only speculate about what was seen. She deemed Leifer a credible witness. He graduated during the spring as a Political Science Major of Windham College, VT.

If they said they saw something I would be fairly apt to say that what they saw was what they saw. I have a feeling, an actual hunch it was a close up sighting of a disk, accidentally seen, she said.

She said her conclusion from just the visual sighting is it might have been a robot controlled disk.

A geological study of the area done several years ago by her son, now a Junior at the Colorado School of Mines, indicates the composition of the hill includes the metal magnesium.

Magnesium is a lightweight element used in space technology. Some believers of alien, interplanetary travel are convinced magnesium is used to construct the disks.

Mrs. Holmes said a UFO found crashed in South America some years ago was composed of the material.

There is no factual data to back her supposition, but Mrs. Holmes said the object might have been a prospecting instrument looking for magnesium. She speculated a mother ship might have been controlling the disk from an Earth orbital position and that it was summoned back to the ship when contact with the humans was determined potentially dangerous.

She did not discount the idea the object was self controlled. She guessed the whining noise might have been some type of security thing.

She said several sightings have been reported locally since July 20, adding:

I think we’re in a flap right now.

A flap is synonymous with a large number of sightings.

One theory of UFO investigators is that flaps occur during time of natural Earthly disaster. There have been several earthquakes and a volcano eruption recently, and a hurricane and a tornado locally since late June. She would not speculate on the theory, however.