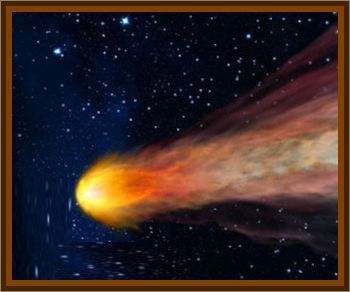 It crossed the U.S.A. in three minutes. Observed and tracked by radar, it headed towards Plattsburg A.F.B. It came to a stop above the trees about ½ mile north of our house. Colored lights rotated around the sides of the object. Then it landed.

Police and firemen arrived to rescue possible crashed flyers. Bad weather and a swollen creek prevented immediate access to the site. Object arose back above the trees after 90 minutes. Made a 90° turn and left in a northly direction.

A mysterious fireball thought to be a meteor flared brilliantly in the sky northwest of Burlington at 9:30 last night. Numerous residents called police to ask about the object. It was seen by the CAA, Civil Aeronautics Authority, control tower at Burlington Municipal Airport. The tower said the fireball also had been seen from Albany, NY., and seemed to fall straight down toward the lake. Pieces seemed to shower away from the main object, which changed in color from whitish to a dazzling pale green as it neared the horizon line.

It looked something like fireworks that showers apart, the man said.

The U.S. Weather bureau here had no information on the object, but said teletype messages indicated it had been seen in Scranton, PA., & Buffalo, NY., among other places.

Some detail may come from astronomers who might have followed the fiery object.

Don’t Talk Too Much’ Fireball in Sky Baffles Area, Especially Lyman 'Shorty' Cote. A dazzling ball of fire suspended from a parachute, a red flare, blinking signal lights and a burned out area in the Winooski woods remained the ingredients of a puzzling mystery last night. Most baffled of all was Lyman 'Shorty' Cote of 65 Pine St., Winooski, athletic trainer at the University of Vermont, who witnessed the entire display.

I don’t know what it was, Cote said last night. But I’m sure it was something mighty interesting.

The Air Force seemed to think so, too. Col. William Hevde, commanding officer of Ethan Allen Air Force Base, confirmed the Air Force’s interest, but claimed an investigation failed to reveal any clues.

The unusual sequence of events began shortly before 9:30 p.m. Friday when a fireball, thought to be a meteor, flared brilliantly in the sky northwest of Burlington.

Hundreds of persons saw it. But Cote saw more than that.

I was watching TV and noticed this brilliant red fireball when I glanced out through my picture window, he said. It was falling and all of a sudden appeared to slow down. Then the color turned from red to white and sort of pale blue. It was then that I clearly saw the outline of a parachute. Then it seemed to land in the woods behind Fitzgerald’s dairy farm off the Malletts Bay road. It flared up red.

Cote promptly called the Winooski Police to notify them. They said they would check with the air base.

A short time later, some Winooski policemen arrived at Cote’s house and at their request he tried to guide them to the spot where the object appeared to have landed. Capt. Joseph Sprano of the Winooski Police Department said a swampy area between Cote’s house and the spot they were headed for blocked their efforts. But I plainly saw two blinking white lights, like flashlight signal lights, at the spot Cote was pointing to from his house, Sprano said.

Cote said he was pointing out the spot to the police when a red flare went up and the blinking lights began, Police and Cote tried in vain until about midnight to find their way to the spot.

On Saturday morning, Cote tried again. This time he was successful. He said he found a scorched spot in the woods, but no signs of life or of the parachute.

Later on Saturday, two enlisted men from Ethan Allen Air Force Base paid Cote a visit and he guided them to the spot. They seemed to know what it was all about, but told me not to talk too much about it, Cote said.

The sergeant also told me not to touch anything, Cote said.

The two airmen left, but Cote said a helicopter was seen later Saturday hovering just over the treetops.

Hovde confirmed that an Air Force helicopter was sent out to search the area, but said it found nothing.

He said he will file a report with Washington, but added that he had no knowledge of what it might have been.

He said he had none of his aircraft in the air at the time and did not know of any planes in the vicinity.

The mysterious fireball seen in the skies earlier was confirmed by the CAA tower at the Burlington Municipal Airport. CAA Officials Say Fire Ball Down in Lake Burlington

Appearing to be a meteor, a flaming red fire ball flared brilliantly in the sky over northwest Burlington here last night. At approximately 9:30 p.m., residents of the area reported sighting the object and telephone rang, people questioned police and airport officials as to its identity.

The CAA Control Tower at the Municipal Airport also sighted the object and explained that it had also been seen from Albany, NY.

It was reported that the ball was not an aircraft by the CAA officials.

Amazingly, the object was to have landed near Burlington in Lake Champlain.

Enosburg Falls - The object that fell from the sky Friday evening was seen in this area. Persons described it as very bright and in many beautiful colors, very large in size.