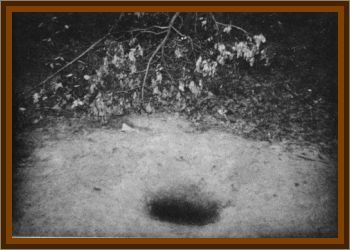 At 12:30 a.m., members of the Arnold Windschitl family were awakened by the sound of a sudden, strong gust of wind. Mrs. Windschitl noticed that a small electric night light in the house went out at the same time but came back on a couple of seconds later.

Mr. Windschitl, thinking a heavy storm was beginning, rushed outside to check the weather but found that the sky was cloudless and there was no wind or lightning. Their ducks, however, were wild, and the electric yard light had gone out. The yard light is actuated by a photo sensor, it extinguishes when the ambient light exceeds a certain value and turns on, after a few minutes delay, when it becomes dark.

Mr. Windschitl theorized that a bright flash had accompanied the wind and extinguished the light. After a couple of minutes, the yard light came back on and the ducks quieted down. They could find nothing else wrong so the family retired again for the night. An older son was returning home on his motorcycle at the time of the incident and saw what appeared to be the flash of a meteor in the direction of the farm.

The next morning, Mr. Windschitl was cultivating corn in a field a few hundred yards east of their farmhouse when he noticed that a portion of his field was flattened and scorched. The area affected was circular and about 25' in diameter. The corn was bent over about 1" from the ground with the stalks all pointing radially out from the center. In the center of the circle was a circular dish shaped depression approximately 2' diameter and 6" to 8" deep in the center. Inside the depression, near the edge, were 5 or 6 small holes, approximately 3/4 of an inch in diameter and 2½" inches deep.

A day or two later, according to the family, they were weeding a bean field about a quarter of a mile south of the corn field when they discovered a similar burned and flattened area. They estimated the diameter of the circle to be 25', as in the corn field, but there was no evidence of the disk shaped depression in the center. Mr. Windschitl offered his opinion that the two areas could have been damaged at the same time.

Heavy rains had occurred in the meantime and the corn was over 6' tall by then, so it was difficult to find the damaged area in the corn field. The dish shaped depression had been almost completely obliterated, but was still noticeable and over half of the corn in the damaged area had recovered and appeared to be as big and healthy as the corn in the rest of the field. Two of the Windschitl boys, Tony and Paul, and Mr. and Mrs. Stone, the investigators, examined the field, but found nothing to indicate damage, apparently, the crops had managed to recover completely.

After the interview, Mr. Stone showed Mr. Windschitl an article in the July/August 1969 APRO Bulletin describing a similar occurrence in the Barr case. Mr. Windschitl said that if an aerial photograph of his bean field had been taken at the time the damage was discovered, it would have appeared the same as in the photograph accompanying the article. He estimated the diameter of the circle in the photograph to be about 25', assuming a 44" spacing between rows, making it about the same size as the burned areas in his field.