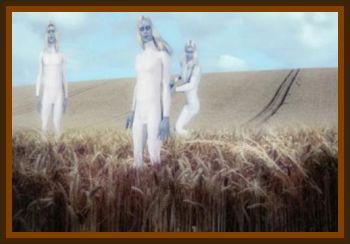 A story has been circulating in the UFO and alien conspiracy theory blogosphere, that a British Police Sergeant had an encounter with Tall White Aliens.

The aliens were supposedly viewing a newly formed crop circle in a field in Wiltshire, England when they were discovered by an off duty police officer.

A spokesperson from the Police reportedly said that the authorities do not possess any evidence, hence could not comment further on it, also it is a personal matter, so as a result, they are not liable to make any declarations.

The mystery surrounding the occurrence was apparently heightened by the failure of Wiltshire Police to comment when contacted by local UFO and paranormal investigators following the incident.

According to the reports, the unidentified Wiltshire Police officer was driving past a field when he noticed a group of strange-looking males wandering across it. The strange feeling about the men’s appearance from a distance led him to pull over in his automobile to find out what was going on.

A group of 3 tall men with long blond hair, each standing more than 6' tall, greeted him as he headed towards the field. Despite the fact that they were walking slowly in the midst of the field, it appeared as though they were looking for something or checking the crop. Because the men were clothed in white overalls, he assumed they were forensic cops on the scene of an event in the field and approached them.

When he got to the far side of the field, he heard a crackling sound that he recognized as a static electricity sound.

It appeared as though the unusual sound was going through the field, and the crop moved in ripples in response to the cracking noise. He increased his voice to get the men’s attention, but they didn’t seem to notice him and didn’t even bother to look up.

However, as soon as he walked into the field, they raised their heads and appeared anxious. And as he got closer, they fled to their heels like a pack of dogs.

I’m no slouch but they were moving so fast. I looked away for a second and when I looked back they were gone.

Despite the fact that the strange looking men fled, the crackling noise continued to spread around the area. The officer saw that they were running with an unusual gait.

The policeman hurried back to his car and drove back to his hometown of Marlborough in Wiltshire, where he had been disturbed by the unexpected meeting.

I then got scared. The noise was still around but I got an uneasy feeling and headed for the car.

He informed his supervisors of the occurrence, but they did not appear to take his account seriously. He had an uneasy sensation throughout the day, and his head was throbbing from the headache.

For the rest of the day I had a pounding headache I couldn’t shift, he said.

A sound similar to static electricity travelling through the field was heard by the witness.

At first he thought they were forensic officers as they were dressed in white coveralls, Russell wrote in a report summarizing the officer’s experience. He stopped his car and approached the field.

The figures seemed to be inspecting the crop, he continued. When he got to the edge of the field he heard what he believed to be a sound not dissimilar to static electricity.

This crackling noise seemed to be running through the field and the crop was moving gently, close to where the noise was, he added.

He shouted to the figures who, at first, ignored him… When he tried to enter the field they looked up and began running.

The investigators stated that they were confident that the officer’s account was accurate and reliable.

I am quite convinced the officer had an experience that day and one that we have not fully explored, Russell wrote.

According to Russell, the tall males described by the witness have the appearance of tall white aliens, which he believes to be true.

At best, Russell could surmise that the crop circle contained a coded message, which the tall white aliens were attempting to decipher at the time the police officer happened to see them.

When the investigators contacted the Wiltshire police, they were told that they were not allowed to speak with them. They stated that the incident was a personal problem and that the police authorities were not looking into the bizarre statements made by the witnesses.

It spurred a lively conversation on Scott C. Waring’s UFO Sightings Daily blog, which was a result of the extraordinary account.

The police officer says that they moved oddly, which they do, because the shape of their leg, from the knee down, actually goes opposite direction from ours, the alien hunter commented.

Nevertheless, tall whites are able to mix with humans unnoticed, according to Waring, since they employ sophisticated technology to conceal their physical appearance.

Some kind of holo emitter makes their feet appear human like, but they still cannot mask their odd walk, Waring wrote.

Some conspiracy theorists believe that tall white aliens and the United States government reached an arrangement in the 1950s to trade with one another. The deal obliged the United States government to offer certain mineral resources to the aliens in exchange for access to advanced aircraft technology, which was essential for the aliens participation in secret Pentagon projects.

An underground base at the Nellis Air Force Base, just a few miles outside of Las Vegas, is said to be home to a community of tall white alien scientists, engineers, and technicians, according to the legend.