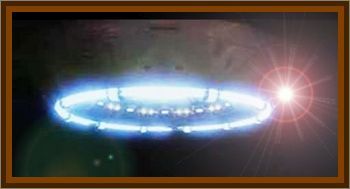 I was standing outside of my house after 8:00 p.m. or 9:00 p.m. one evening in the late 1970s in Wilmington, DE. We lived in a typical residential development on a cul-de-sac. While I was outside, I looked up because a spotlight caught my eye.

It was then that I saw searchlights being beamed onto housetops up the street - maybe about 6 or 7 houses away.

I stood there and stared because the lights were coming from this large, circular disk that seemed no more than 35' to 50' off the ground. The disk was moving very, very slowly, if at all, as the searchlights beamed down upon each house. I stood there somewhat shocked as I tried to make sense of what I was seeing.

As the disk started coming closer to my house, I became frightened out moved from the cul-de-sac sidewalk to the front step of our house, where I could still clearly see the disk and the lights. Then, suddenly, the disk took an abrupt 90° turn and totally vanished.

The thing was completely silent, which was odd.

At that point, I ran into the house to tell my parents, who clearly did not believe me, what I had seen. I felt insulted and frustrated, of course, because what sane person would make up something like this? I was an honor student, for heaven's sakes.

Well, the next day our sweet, elderly neighbors who lived across the circle from us were speaking with my mother and happened to share the same story, as they had seen it, too. Obviously, I was happy to hear that others had seen it as well.

What was most puzzling was the absolute silence of the craft and its ability to simply make a left turn and vanish. I'll never forgot this, and while I can't say that I do or do not believe in extraterrestrial lifeforms, I know that what I saw was something inexplicably out of the ordinary.