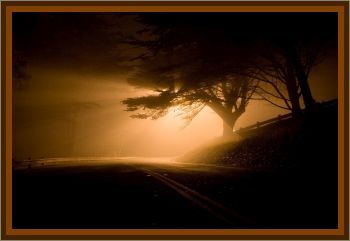 I was riding my bike home from a friends house after having dinner there, so I know the time was around 6:00 p.m. or 7:00 p.m., shortly after total darkness. The exact day of the month I can not recall.

I happened to look up at the sky as I was riding and saw what I first thought was the moon, but then noticed it seemed brighter, and orangeish in color, and was featureless. No dark spots or man in the moon, Almost immediately it grew until it filled the entire sky, then disappeared completely.

The effect was like the moon was falling and I remember ducking! I stopped riding and continued to watch the sky, wondering what I had seen. Suddenly it was back, in the same position as the first time, only a greenish color this time. Again it quickly grew until it filled the whole sky, then disappeared again just like before.

I was a bit scared at this point, I was 14 at the time, and rode home quickly, telling my mother what I had seen as soon as I got in the house. About 10 minutes later a report came over the radio, local AM station, saying that strange lights you may have seen in the sky were atmospheric testing. At that time you accepted what you heard on radio or TV as fact, so case closed.

Later in life I often wondered what sort of atmospheric testing it could have been and why I had never heard anything more about it. I have since searched the internet extensively and can find no mention of any type of testing that could produce this sort of phenomena,