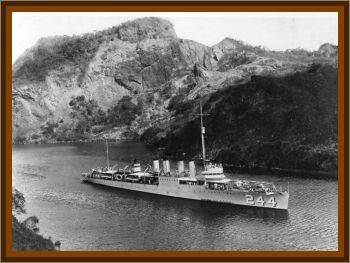 It was on a clear night in 1943 that the crew of the USS Williamson (DD-244) Navy Destroyer experienced an unexpected close encounter with multiple unidentified flying objects.

In April the ice pack in the Bering Sea extends as far south as Bristol Bay, Alaska, which is north of the Alaskan Peninsula, the USS Williamson (then classified as AVD-27) was on patrol duty and steaming in the western Bering Sea somewhere north of the western Aleutian islands of Kiska and Attu, but well south of the latitudes consistent with the northern ice.

The destroyer had just supported an invasion and occupation of the islands Kiska and Attu at the far western part of the Aleutian Islands. On the night of the incident the weather was logged as a clear night with calm seas. The ship was traveling at about 20 knots.

At about 11:00 p.m., the port and starboard 20mm gun crews observed a row of red lights off the port side, traveling parallel to the ship and slightly forward of the bow. A petty officer, who witnessed this event and was part of the Starboard 22mm gun crew, told this account:

I did not see the lights when they first approached so do not know the direction from which they came, or if they came out of the sea. There were at least eight lights in a row, evenly spaced, canted at about 15 degrees to horizontal.

It should be noted that during the period of the invasion of the islands of Kiska and Attu, the ship had logged sightings of Japanese military patrol aircraft in the area and were quite familiar with the silhouette of these aircraft and their engine noise. The red lights flew silently.

The petty officer gave a relative size estimate of each of the red lights:

I estimate that it would require a cantaloupe held at arm’s length to cover a single light.

The observers on the USS Williamson could not discern a structure associated with the lights as there was nothing apparent but blackness between the lights.

The red lights were a very deep red and did not cast a beam.

The eight red lights were reported to have continued to pace the ship for a little more than an hour.

Any further data on the incident is most likely buried in her logs somewhere deep in the naval archives.

In December 1943, the Clemson-class USS Williamson was reclassified back to her original Destroyer classification as DD-244. The USS Williamson had an excellent record of accomplishment during the rest of World War II. Regretfully, like many fighting ships, the Williamson was decommissioned in November 1945. The ship was then struck from naval records in December 1945. She suffered the fate that many noble ships did at the end of the war, The Williamson was scrapped in November 1948 and her hulk was acquired by the North American Smelting Company.