During A Training Excerise 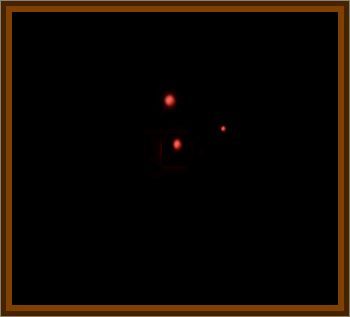 During a training excerise at the U.S. Army training center at Wildflecken, Germany at approximately 11:30 p.m., at an elevation approximately 8,000' alt. I was in a foxhole overlooking a battalion of tanks firing at simulated enemy targets below the ridge. I happened to look over my shoulder and upward at a clear semi starry night sky, when I observed 3 circular shaped objects that glowed a semi bright orange.

At first, I thougth that they were the the back exhaustes of three F104 starfigther jets that were going to participate in engaging the tanks simulated targets also. But what happened next, sort of scared me a little into the realization that I might be observing a UFO phenmomena, because all of a sudden the circular shapes were turning into cyclinderical in shape.

I tried to measure there size by extending my arm in front of my face at a 45° angle toward the object, and measure between my left forefinger & thumb and measured it to be 3" for each object. They continued to glow the same color and almost stopped in mid flight for approximately 30 to 45 seconds, and then continued to move slowly, then zoomed out of existence. During the observation I called my buddy who was at the extreme end of our formation. I was 75' away from him & the next man was 75' to the right of me, to see what I saw and acknownledge I was not crazy.

He made the same observation.