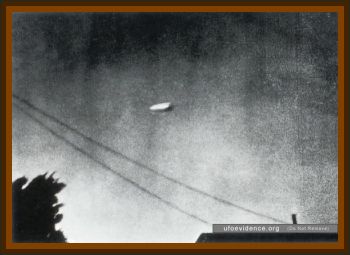 During the 1967 UFO wave, Mr. Jefferson Villar of Union City succeeded in photographing the bright silver colored, capsule shaped object that passed over his head.

It was brilliantly reflecting the sun’s rays like metal and was making a strange noise as it flew along.

Villar managed to get his camera into action and snapped 6 good color photographs of the clearly defined cylindrical structure with rounded ends. It looked to be solid and real as it passed at low altitude above a house and telephone wires. Villar estimated the object to be flying at between 1,500' and 2,000' above the surface at that point.