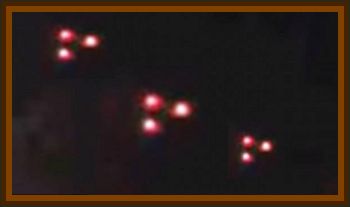 I was driving with my then girlfriend late one afternoon before sunset westbound on Pico Blvd. just west of Sawtelle Blvd.

While stopped at a traffic light, she pointed to something she saw in the sky which was almost directly over us. I had to lean forward to be able to see up through the windshield to observe 3 identical black triangular objects. I observed them for less than 30 seconds. The objects were motionless and we could not hear any noise from the objects. There were no markings, lights, reflections or familiar aircraft features, (stabilizers, wings, just a solid black object. The objects were in a loose triangle formation separated from each other by a distance of approximately 5 times their individual width. What struck me most was their stillness and almost silhouette like appearance.

My impression is that the objects were the size of private jets or fighter planes. They were significantly higher in altitude that the normal Santa Monica airport traffic that occurs regularly in that area, enough so that a closed fist at arms length could have covered 2 of the objects, were they spaced tip to tip.

While observing them, I moved my head to change my viewing angle so as to verify that this was not caused by debris on the windshield or reflections. These were definitely airborne objects.

Once the traffic light changed to green, I resumed driving, but was unable to see the objects again since they were nearly directly overhead.

Once we had driven a few blocks so that the objects should have been easier to view from a shallower angle, the sky was empty where they had been.

Can sighting be explained as any conventional man made or natural object?

Given the shape of the craft, their hovering behavior and sudden apparent disappearance, I assume that the objects were either undisclosed advanced aircraft or extraterrestrial craft.