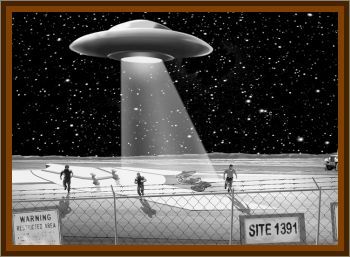 Whiteman Air Force Base is located about 70 miles east of Kansas City, Missouri, near Knob Noster.

During the 1960s, Whiteman housed a vast ICBM complex, containing up to 150 missiles. One of the scariest, most inexplicable UFO incidents ever occurred here.

It started around 9:00 p.m. I received a call from the Wing Security controller asking me to tune my radio to the base frequency. I did and started listening to a series of events that began with a missile site losing power and a strike team being dispatched to the site, only to see this saucer shaped device hovering over the site. When the team was ordered to advance onto the site, the craft backed away and power returned as soon as it was away from the site. The UFOs flight path took it over one of the base’s ICBM launch silos. When the passed over this site, the nuclear armed missile inside lost all electrical power and went dead.

This occured in the southernmost flight area of the missile complex. The craft began a slow northerly route, tracking over missile sites as it went. Each time it would cross a site,the power would be lost and return sas soon as it passed away. The craft came nearly over the base and was visually sighted by the weather observers and control tower personnel. It continued north out of the wing area without incident except for the power outages.

Incredibly, the UFO flew around the Whiteman complex for the next two hours, killing power in all 150 missiles controlled by the base.