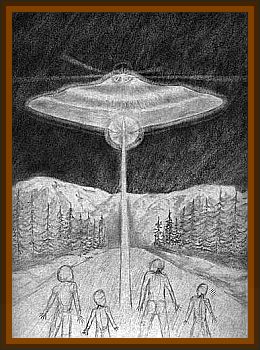 I am 23 years old and I currently live in Vancouver, B.C. I happened to stumble upon the report about Wolf Creek sounds, it interested me a great deal. The reason being that when Wolf Creek was a new subdivision, I lived there with my father and mother and older brother. I’m not too sure of my age at the time, 4 or 5 years old. There were about 5 or 6 houses in the subdivision at the time but the reason I’m writing you is that I have a story about Wolf Creek my brother and I as well as 2 other brothers who lived across the road from us sighted a UFO.

We were walking down the subdivision road in winter just fooling around as children do when we saw lights illuminating through the trees on our right.

The lights were red, blue and green and were very bright. We all took notice and stared in surprise then a UFO moved silently out from the right just above the treeline. Its speed was approximately 5 miles an hour, its size, 50' diameter. The only description I can give it is it looked like the UFO in the guardian footage that was taken in Ontario. The UFO stopped directly in the middle of the gravel road approximately 20' forward and about 50' up. There was no mistaking what it was because it was right there.

When it stopped a blue beam shot out of the craft directly between the 4 of us. I was petrified with fear, my mind went into shock so what happened next is vague but I remember the beam shot back up into the craft and my brother threw me into the ditch on the side of the road. I looked across the other side to see the other brothers in the opposite ditch. The UFO hung there motionless for a second then started to move in the direction that it was originally going. The lights were just as bright as before but only on the left side of the road, then it was gone.

My parents separated, my brother stayed in the Yukon and I moved to Vancouver. Some 12 years later my brother and I reunited. I asked him if he remembered, he said he did but was surprised because he forgot all about that day. I also asked if he kept in contact with the 2 brothers he said no. Since then I have tried to contact them. My family cannot remember their last names and I only remember their first names. I would be grateful if you could email me any wolf creek sightings.

Most interesting account. Must have been quite the experience. It is amazing how some people can totally forget about such an incident until they are asked to recall it. I promise to keep your name confidential. If you would like, I could try to help locate those 2 brothers. I could also call your brother.

Was there any sound associated with the craft?

Yes it was very interesting, so much in fact, that it changed my way of thinking. I have constantly thought what I would have been like if I had not been there at that place in time, definitely more ignorant to the possibilities in life. These thoughts have plagued me for 15 years.

I have followed the paranormal with great interest all of my life. I have even thought of becoming a UFO investigator myself. As far as I know my experience is classified as one of the 5 kinds of close encounters, being within 50' of a UFO.

I’m not an avid believer in alien abductions but there is that possibility. I was only 5 years old but the memory has always been vivid in my mind except for certain aspects of the encounter, like when the beam came down or if there were any windows on the craft. It’s like opening a door that you can’t close. I have told this story many times uncaring if anyone believes or not, because I believe, and I know what I saw, be it an experimental craft or alien observers. I thank you for hearing my story.

As for your question of sound emanating there was none, just the wind through the trees. I think these have the ability to become invisible because if they have the ability of antigravity they harness great energy.

As for your other question I have recently found out the last names of the 2 brothers. As far as finding them I have given up the idea of contacting them. I don’t know how somebody would react to such a thing but you’re welcome to try if you’re interested in corroborating my story for investigating purposes. Once again I thank you.

As for my brother, I’ve tried to get him to write down what he remembers but he won’t. All he will tell me is that he remembers, that’s it. I guess he doesn’t want people to think he’s nuts. I have kept on him about it but he won’t change his mind. Sorry.

No problem, sounds like he wouldn’t appreciate a call from me. If he ever changes his mind he can give me a call. His name will remain confidential. Likewise, you can call me anytime.

I looked for Yukon listings under the names you gave me for those brothers but with no luck.

You shouldn’t worry too much about finding those boys, it might be a dead end. They could have moved years ago or left the country for all I know. I just had to get it off my chest, tell someone who would find an interest in such a thing.