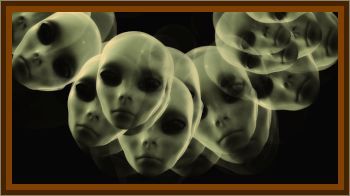 I am a 35 year old mother of two and I believe that myself and my children have been abducted many times and over many years.

My mother first told me of an abduction that happened when I was just 2 or 3 years old. We had been living in Whitehorse as my father worked in the copper mine.

My mom said she woke up to a heavy weight on her chest and she could not move, she stated she was terrified and wanted only to get to my sister and myself when a voice spoke inside her head apparently, telling her the children would be fine and she should not be afraid. She said this whole experience lasted several minutes and that the dog was barking frantically the whole time.

When she was able to move again she checked on us and we were fine.

The first abduction of mine I remember was when I was pregnant with my son, although I had suspicions of earlier abductions, this one is my first very clear memory of one.

I had been very ill during my pregnancy and I recall waking up one night floating towards my bedroom door, I could not move at all, I could just barely turn my head. I could see my husband and he was awake as well looking at me with huge eyes. He could not move either. I remember nothing after that. But when I spoke to my husband in the morning, he related to me a weird dream he had of me floating out of the bedroom and not being able to get up to stop me.

That morning the issues I had been having with my pregnancy were resolved, I do not know if this was because of something that was done to me that night or not but seems to be a huge coincidence.

My children have both told me stories of the monsters, or the owls that come into their rooms at night to give them suckers and poke them with needles.

We have all woken many mornings with mysterious needle marks and bruises. We have also found sucker sticks in the children's rooms when we did not allow sweets in our home and can not account for where they came from,

I have thought I was crazy for years but I do believe we are not alone and for whatever reason they seem to keep coming back for me.