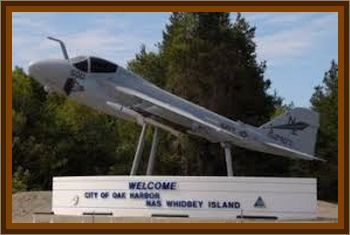 After a thorough investigation of all pertinent facts, the UFO sighting reported by Dan MacIndoe of Oak Harbor on January 21st has been classified as a true unknown.

MUFON, a civilian organization of trained professionals that investigates UFO reports has ruled out all possible conventional explanations for the object seen by Mr. MacIndoe, his wife, mother, mother-in-law and father-in-law, and 3 year old daughter.

Dan MacIndoe, age 32, an ex Navy lieutenant with 7 years military service in the field of aviation supply, including work assignments with the Navy's prestigious Blue Angels squadron, was rated as an exceptionally credible witness by MUFON.

The UFO encounter began at 10:45 p.m. on the night of January 21st at the MacIndoe home not far from the Whidbey Island Naval Air Station. Flight operations at Whidbey NAS had by that time been over for 15 minutes, with the last plane reported on the deck at 10:30 p.m.

The UFO was first observed by Cornelia MacIndoe, age 72, Dan MacIndoe's mother, who sighted a bright, orange yellow stationary light in the southern sky when she went outside to smoke a cigarette. She called the entire family's attention to the object, and together they watched as the UFO shot straight up for approximately 3° of arc from a position 25° above the horizon in the direction of the Naval Air Station.

The object then abruptly stopped, made a sharp right angle turn in the horizontal direction and came straight towards them.

According to MacIndoe's account, the object covered a distance of one and a half miles in approximately 3 seconds. As the UFO approached the house it seemed to slow, taking approximately 15 seconds to slowly drift directly over the heads of the five adult witnesses and child. It disappeared from view as it travelled in a straight path to the NNE, passing behind some tall fir trees behind the MacIndoe house.

While the object was passing overhead, Dan MacIndoe was able to observe the object through a 135mm telephoto lens, and was able to determine that there was no sound associated with its flight. Dan described the shape of the underside of the object as that of a perfect circle. The lights were blueish white in nature and I estimate 15 lights spanned the circumference of the circle. All remained on forming a circle of running lights. The lights would pulse brighter in sequence, I believe going in a clockwise direction, Dan reported.

He went on to say:

During the event winds were calm, there were scattered clouds in the vicinity. We live in a rural area. There were no sounds. During the entire episode, none of us heard the usual prop or jet noise associated with military aircraft using the airfield. At the time the object was directly overhead I asked my family for complete silence to listen for engine noise.

There was absolute silence.

According to Dr. Donald Johnson, Washington State Director for MUFON, a combination of factors were sufficient to rule out all mundane explanations for the sighting.

The fact that this overflight occurred in restricted military airspace, together with the testimony of multiple witnesses, the complete lack of sound, the observation of the unusual lighting pattern on the object seen through magnification, and the lack of wind combine to provide sufficient information to classify this case as an unknown.

In other words, there is little possibility that the object the MacIndoes, and others reported seeing that night was a satellite, balloon, commercial or military airplane or helicopter, or astronomical body.

The National Weather Service and Whidbey NAS were called to confirm that there were no weather balloons released at that time. Additionally, several of Mr. MacIndoe's Dugualla Bay neighbors and others from as far away as Lake Washington, Edmonds, and Bellingham called him to report that they had also witnessed unusual lights in the sky that evening.