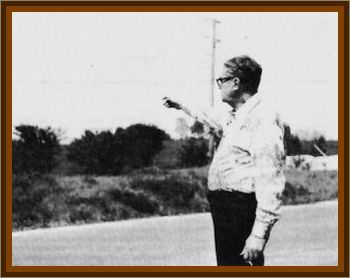 In 1976, 30 year veteran police officer and World War II combat pilot George Wheeler said he saw a UFO near his home in Elmwood, Wisconsin. It was the second time Wheeler had seen something strange in the skies above the area. The officer spotted what looked like a very bright orange glow coming from the top of Tuttle Hill. He said it was as bright as the sun and hard to look at.

At first Wheeler assumed it was a fire, so he drove his squad car to the top of the hill. To his surprise, he found a glowing object that seemed to be hovering 100' off the ground, it had six bluish white lights, windows on the sides and he could see moving shadows inside.

That’s when he radioed the sheriff’s department in Ellsworth to tell them he was watching a UFO. As he did the spacecraft quickly shot straight up into the sky making a whooshing sound as it left. Wheeler claims a flash of light came down from the ship and struck him. At that point, the squad car’s lights and radio went completely dead. Wheeler was barely conscious. He couldn’t remember what happened after that until a local resident stopped to ask him if he was okay.

When the man who aided Wheeler was interviewed about the case, he said Wheeler told him he’d been hit. He asked him if he’d been hit by a car, but he said, No, one of those UFOs.

Elmwood is actually a hotspot for UFO sightings, a lot of people making such claims, so it was no particular surprise. But being hit by a UFO took him back a bit.

There were several other witnesses involved and interviewed in this case. Mrs. Miles Wergland, who lived just outside of Elmwood, claimed she saw a bright orange moon shaped object on the hill. Another witness, Paul Fredrickson, saw an orange glow, like a half moon, like a moon cut in half on Tuttle Hill. (This wasn’t the first time Mr. Fredrickson spotted something like this. Only six months earlier, he and his son saw a very similar object in the sky about the exact same time and place.)

Nearby, at the O’Bryan family farm, Mr. O’Bryan said his TV set quit for a short time while he was watching the Perry Mason show, right about the same time it all went down. A 9 year old boy at another nearby farm said his dogs were barking and acting unusually weird that night. Police Chief Gene Helmer of Elmwood, yet another person involved, had been at home monitoring the police scanner, when he heard Wheeler say he was watching a UFO. Helmer’s radio went dead before Wheeler could describe it. But he did hear him say, Get somebody up here, I’ve been hit. That’s when Helmer left right away to see what was up. When he got to the top of the hill, he found the man trying to calm Wheeler down. Helmer said he’d never seen a man as frightened and upset as Wheeler was. The officer also pointed out that the patrol car, which recently had a tune up, needed all of its points and plugs replaced in the engine and the starter was also acting up.

At about 1:00 a.m, or 2 hours after the incident, Mrs. Wheeler had to take her husband to the hospital. He was there for three days and tests found nothing, so he was released. Only a few days later he returned because he was having severe headaches and nightmares. He could also no longer remember any of the details from the sighting. As his health rapidly deteriorated for causes his doctors could not determine, he repeatedly told them, to their disbelief; that he was dying from the mysterious effects of internal injuries caused by alien beings. Within six months after his April encounter, Officer George Wheeler died of unknown causes.”