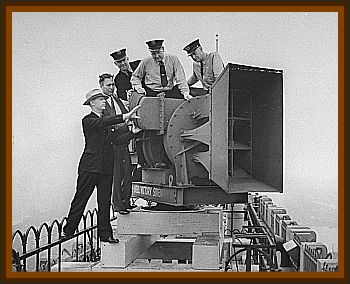 A civilian at Westover AFB observed an object half moon in shape, with a silvery outline traveling south at a speed greater than known aircraft. The object appeared to be at an altitude from 10,000' to 20,000'. The object was first sighted at an estimated 60º angle above the horizon.

The object disappeared suddenly without apparent reason. The Westover Approach Control Radar was inoperative at time of reported sighting. The observer is a member of the Air National Guard and is an aircraft mechanic.

Approximately 2 hours before the ConAC Air Defense Controller notified the Headquarters USAF Command Post that a number of unidentified aircraft were approaching the northeast area of the United States, an unidentified half moon shaped flying object was observed at Westover AFB in Massachusetts.

Whether the Air Force intelligence or the CIC received any special UFO information is not known. However, there were sightings on December 6 which are in the Blue Book file, one at West Springfield, MA, near Westover AFB at 8:16 a.m. One object, half moon shaped, fast, flying in a southerly direction, and one at Fort Myers, FL at 5:00 p.m.