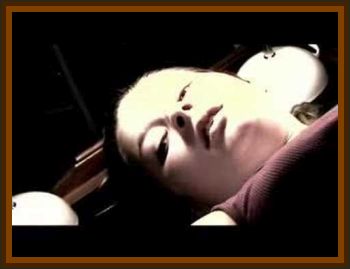 13 year old Betty Aho had left the house to play when she saw an object like a moon grow larger, she was then unable to move.

She found herself inside a white room, feeling relaxed. Then 3 small beings glided toward her. The beings were humanoid 2½' to 3' tall, gray skin, large oval shaped heads and huge black oval shaped eyes.

They wore silvery white coveralls, which seemed to blend with the mist and bright light in the room.

They reassured her, and one raised his hand and she felt sleepy. She floated with the beings into a cold misty room where she was suspended in midair over a box like table.

The beings placed globes of light by her head & feet, and then beams of light closed in a square around her.

The beings escorted her to a dark room where 2 more beings met her. These were 5' tall and wore gray coveralls. She was greeted by name and told she was going to take a ride.

They laid her on a large round cushion and fitted a mouthpiece device around her tongue. A being relieved her discomfort by laying a hand on her forehead. She began spinning and felt acceleration, a mist fell on her, and lights flashed through a glass dome above her.

The craft crashed into a body of water and came out. She saw a great tunnel, apparently made of ice, where crystals held a collection of humans dressed in various ethnic and historical costumes, much like a museum.

She left the craft and entered a dark misty region filled with objects resembling UFOs.

A taller being escorted her to a clam shaped tunnel through a subterranean conduit as she approached her destination, which was a great door in a glass wall where she was to meet The One, she had an out of body experience and entered through the door.

The events inside remained a secret. Soon a tall human with white hair & dressed in a white luminous robe directed her to another clamshell transport. When she emerged, a tall humanoid being escorted her to a mine tunnel where several small beings cut blue stones from a wall. She re-entered a craft and a being had her operate a console. She was then floated onto a table.

The beings then apparently removed her right eye and implanted a tiny device deep within her head. She was then extensively examined & scanned.

Following other procedures she was promised that she could go home.

Her next memory was of being on a field near her home near a landed craft that was shaped like a sphere of reflective metal and was standing on 3 legs, beams of solid light were coming from the top and stopped as if chopped off.

A door and a sunburst emblem were also visible.

She crossed the field with a taller being in front and 2 smaller beings behind carrying luminous globes. The taller being told her that they were watching over her & that she had to forget the experience.