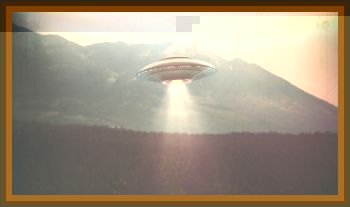 Mrs. Evelyn Chorney and her son Steven, 14 of Westford, MA were leaving the library at 8:50 p.m. when Mrs. C. saw an unconventional object in the sky.

There were stars out but no Moon and there were light scattered clouds in the sky. Lights from the city of Lowell illuminated the clouds over that city. The air was very still and sounds carried a great distance.

A train near Lowell a mile away was heard clearly. The library is located in the center of town which is on a hill and is the highest elevation for miles around.

Upon leaving, Mrs. Chorney stopped on the library steps to talk to a special policeman, they both spotted a bright red light and what appeared to be 4 slanted windows in front of it. They viewed them through the treetops.

There were no leaves on the trees so they got a fairly clear view. They heard no sound at any time. The policeman said nothing, neither did Mrs. Chorney. She made an excuse to leave, got her son who was talking to other children and they got into her car.

She drove to the South, down the side of the Hill where she’d seen the object, and stopped. She spotted the object moving very slowly, with a wobbling effect, lt started a slow wide turn to its left and Mrs. Chorney started up her car again and drove further. She and Steven got out and viewed it lor several minutes.

Watching it continue to bear left, Mrs. Chorney drove to the High School area on the northeast side of the hill about ¼ of the way around the hill.

She drove through the town, 3 blocks, which took oDly a few minutes. Swinging into the road which leads to the high school, they stopped the car and got out again and viewed the object.

The window lights were out but there were 2 bright red lights, one on each end of the cigar shaped craft. The lights constantly dimmed and brightened alternately.

As the object moved past the high school, the red lights went out and a light which gave the appearance of a straight vertical line, appeared just inside of the end of the object and it blinked on and off very fast for about 20 seconds. As the craft completed the end of its S shaped route, and appeared under the cloud cover over the Lowell area, the blinking light stopped and the red lights began pulsating again.

Moving very slowly over the Lowell area the cigar shape could be seen very clearly. It was dark, almost black. It moved on into the southeast and faded out of sight.

To their right, toward the end of the sighting, the observers saw 3 bright red round pulsating objects. When the big cigar shaped object headed toward Boston, the small lights moved in the same direction. They also disappeared.

The entire sighting lasted between 30 and 40 minutes, after which Mrs. Chorney returned home, about 2 minutes from the center of Westford.

The Chorneys then saw aircraft circling Westford and they continued to do 60 mph for about an hour. Mrs. Chornev stipulated that no conventional aircraft were seen in the whole area during the time of the sighting.

1 - We feel Mrs, Chorney is an extraordinary observer and this is one of the most detailed sighting reports we have received. Our compliments to member Greg Bishop for a complete investigation.