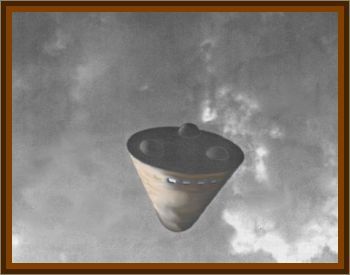 Westendorff UFO sighting refers to a UFO sighting by Haroldo Westendorff, a Brazilian manager of an improvement of rice company, a transporter company and a ration factory. The sighting occurred when he was piloting his own Tupi airplane.

At 9:00 a.m., he took off from Pelotas' airport. At 10:15 a.m., when flying over the Saragonha Island, at Patos Lagoon, 10 miles away from the airport, a huge flying object surprised him. He put his airplane closer to the object, and flew around it for ten minutes, keeping an average 300' distance.

While flying around it, he observed the object was made of metal or something similar. The base was smooth, and had 8 vertexes, each one with three objects similar to bubbles. The object was spinning around itself and was flying towards the sea.

Westendorff didn't notice any hostile reaction from the UFO.

Westendorff contacted the Infraero room at Pelotas' airport by the radio, and reported the sighting. He asked Airton Mendes da Silva what he could see on the East direction, towards the 15/33 runway. Silva said he saw a triangular grey object, with rounded edges. He was accompanied by the assistants Gilberto Martins dos Santos and Jorge Renato S. Dutra, who tried together to identify the object.

Westendorff also contacted Cindacta II, in Curitiba, Paraná, which was responsible for watching the skies of southern Brazil. They said there was nothing strange on the radars, even though Westendorff's plane was detected.

Suddenly, the top edge of the UFO opened and a smaller UFO got out of the big one. It inclined 45° and flew away to the sky at an unbelievable rate of speed.

Westendorff kept away from the object.

Afterwards, the big UFO also climbed upwards at a high rate of speed, without making noise, wind, explosion or any other expected physical reaction.

The Ministério da Aeronáutica, Aeronautic Ministry, kept a secret investigation of the object seen by Westendorff. A sergeant of Canoas air base was sent to Pelotas to get the deposition of Westendorff and the employees of Infraero. He was also informed of reports about the object and saw a drawing of the object.