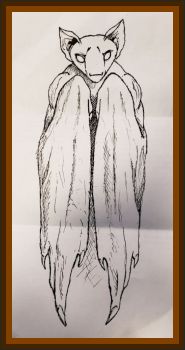 I am very sorry for sending this so late, but I had to write it all down while the experience was still fresh on my mind and let’s face it, after what I just saw, I seriously doubt I will get any sleep until the sun is up and I have calmed down somewhat.

I am working as part of the clean up crew during the Wisconsin State Fair, and tonight I was by the main stage, helping to clean up after the concert that had let out earlier tonight. I was with another person who was about my age, we were talking about the concert that had let out about 2 hours before, Christian rock group, Skillet, and we were toward the far right hand side of the stage picking up trash and just talking when my partner yelled out:

What the f*ck is that?

I looked up and there, about 30' in front of us toward the parking lot, was what looked like a very tall being.

But it wasn’t like any person I have ever seen before. It was about 7' tall and thin but still looked very solid. It was coal black and had 2 glowing yellow eyes and it had bat like wings.

Literal f*cking wings that must have stretched out 12' from tip to tip coming out of its back. This thing looked like a demon from the depths of Hell and it appeared to be staring directly at the stage where there were still people breaking down equipment from the concert.

It’s only now that the irony sticks out, what looks like a literal demon from Hell checking out the stage after a Christian rock concert.

This thing took a couple of steps toward the stage. It looked like it wasn’t all that steady on its feet but I wasn’t close enough to see what its feet looked like nor was I stupid enough to get close to this thing.

It stood there for about 10 seconds before it turned its head and looked right at us. The air felt like it was drained straight out of my lungs and I felt an overwhelming sense of terror, not fear but absolute terror, like my life was going to end right then and there. And this thing was going to snatch my soul and drag it down to Hell. It then flapped its wings rapidly a couple of times almost like it was stretching them out and took off into the air and was gone. It was swallowed up by the night and was done in a matter of a few milliseconds.

We told him what we had seen and I’m not sure if that only helped reinforce his belief that we were actually stoned. He told us that maybe it was just a big owl or some other bird and maybe the lights from the stage and the shadows had made it seem bigger than it really was.

I’m confident that what I saw was real and it stuck in my head all night long. My partner looked like he had seen the devil himself. He said it had scared him and he was going to stick toward the well lit areas for the rest of the night.

We eventually got to work and went home about 2:30 a.m.

I was able to get in contact with the witness and she told me how she was doing clean up at the Wisconsin State Fair for added money. The witness is a student going to her final year of college.

I asked her about the other person who was witness to this sighting and she claimed that she had not talked to him or seen him since the initial incident.

When asked about the sighting she stated that she was approximately 30' from the stage and was picking up trash after a concert had let out for the night. She stated that the entity was standing out in what would be a parking lot. The witness stated that the area is used as a motor track when it is not being used during the Wisconsin State Fair and that the area where this happened was usually the infield for the track.

When asked to describe what she saw she stated that the entity was approximately 7' tall and was a very dark shade of black and that it had a thin look to it and glowing yellow eyes.

I asked her if they were glowing from within or where they reflecting the surrounding light and gave them the illusion of glowing.

The witness said she could not answer that, and that they only appeared to be glowing.

The witness stated that the entity seemed to be preoccupied with people who were helping put away equipment after the concert and initially did not seem to notice her or her partner. After watching the stage the entity noticed them and turned toward them.

The witness said that she felt as if all the air in her lungs left her body and she was gripped with a feeling of fear that immobilized her and prevented her from screaming or trying to run away. The entity then extended its wings and took off.

When asked if this could have been anything like a large owl or crane, the witness said it was too large and seemed to have some intelligence to it and that she was certain it was not a bird or other creature.

When asked what she thought it could be, she said it was probably a demon.

When I asked if the witness had returned back to work she did advise that she returned the very next night and every night since then. When asked about her partner she stated that she has not seen him and had no way of getting in contact with him.

It is the investigator's opinion that the witness did indeed see something that night but without further corroborating evidence from the other witness, then what it was that they witnessed that night is inconclusive.