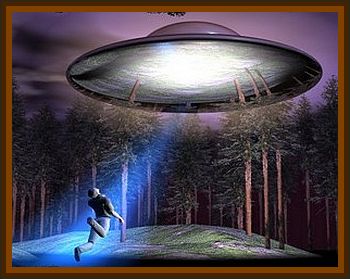 Dan Welch, was sitting in the back seat of a car on the passenger side when he felt a sensation of light coming from behind him. At first he paid little attention to this thinking it was just bright car lights coming up from behind them.

Then approximately 500' in the clouds, the outline of an oval shaped blue light with a similar beam of blue light came on to engulf the small town which they had just driven through.

They were driving up a small incline, so it was very easy to discern the oval shape of the blue beam of light. It was so distinct that he could clearly make out the oval edge of the beam in the darkness of the night. It was the most intense, beautiful blue he had ever seen, but strangely he could look at the light without squinting.

The awestruck witness could tell that there was a definite on-off pattern to the light, which reminded him of a gigantic flash bulb.

The UFO was huge, compared to that of a pineapple held at arm's length.

As he continued watching, the UFO came on again but this time directly over the road behind the car. It was definitely moving in a SE to NW direction.

The next sequence was of the UFO appearing directly over the car. Dan distinctly remembers looking up into this light. But it was no longer blue but instead a very intense white light, he remembers that it hurt his eyes.

The next thing he remembers was sitting down in the back seat looking out the front window of the car and hearing the driver say:

I'm getting the hell out of here.

With this, the driver slammed his foot onto the gas pedal and left the area at a high rate of speed. Dan caught a last glimpse of the UFO again approximately 1,000 yards in the distance.

Upon arriving at their cottage the main witness noticed that it had taken an 90 minutes to get there, also upon arrival noone in the car mentioned the UFO.

To this day it has never been discussed among the witnesses. Not long after the encounter the main witness began to get severe headaches.

A few years later Dan was now living in Toledo OH and one morning was backing out of his driveway when he noticed an old style black Cadillac parked in front of his house. He pulled away from the house and the black Cadillac starts following him right into the parking lot of the school where he taught.

The Cadillac proceeded to pull up in the parking space right next to his. He was very concerned about who this person was and why they were following him.

When he looked over to see who it was, he was met by a pair of icy, glaring eyes. To this day, he will never forget how these eyes stared right through him. The man just kept staring at him.

The man wore a white overcoat with the collar turned up all the way around his neck with a white brimmed hat turned down so all that the witness could see were his eyes and nose, which appeared to be very thin and narrow. The eyes reminded the witness of two black coals. The skin of the stranger was whitish. The witness stared back for a few seconds but the quickly walked into the building hoping to catch a glimpse of the license number.

He constantly kept the Cadillac in his peripheral vision all the time as he walked to and entering the building. On entering the building there was a door immediately to his left that he entered where the room included windows all along the side facing the parking lot from which he had just come in from. It had taken him less than 5 seconds to get to the window to observe this Cadillac...but it was gone.