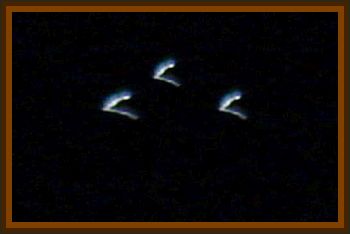 An old report for the record.

This sighting took place a long time ago, but I remember it very clearly.

I’m estimating the date by the age I believe I was at the time, 16, and by the month we always vacationed.

Weekapaug is a small town on the south shore of Rhode Island. There are a series of large tidal ponds along this shore that are connected to the ocean by channels about 100' wide. The Weekapaug channel has stone jetties on either side that stick out about 100' from the beach.

On this night I was sitting on the tip of the eastern wall at about 10:30 p.m. looking at stars. The sky was clear overhead, but there was a heavy mist over the water to an altitude of about 30'.

As I sat there facing the sea, and due South, I noticed 3 dim, translucent, globular lights move by from East to West in a tight triangle formation.

I watched them from about 160° to about 225° at which point they faded in the mist. My first thought was that they were the lights from a car's headlights hitting thicker fog out over the water, but the following observations seen to conflict with that theory.

1) The lights were well defined. Each one looked like a frosted globe light you might see in front of someone's house, only a little more translucent and defused. I don't know whether the lights were that way by nature or if the mist was defusing the light.

2) There were 3 lights that held the exact pattern, which was one light in the lead with the other 2 trailing at an equal distance.

3) The lights maintained a straight course and steady speed. If they were the projection of car lights, the car would have to be making a tight turn to move the beams left to right so fast. In such a scenario, you would expect the lights to either swing in an arc around the source, or, if they were shining on the straight edge of a fog bank just offshore, to diffuse and move away faster as the source beams swung to an orientation more parallel to the surface they were shining on.

These lights maintained a distinct shape and straight course, a very steady speed and perspective that changed in what seemed an appropriate way for an object traveling in a straight line. In other words, as the object moved away, the 2 rear lights became more face on to me than they were when it was straight out.

4) The closest a car could have been was about 600' behind me and the beams would have had to come right over me. I looked around very quickly, but saw no car, nor did I see any sign of beams passing by. Afterwards, I tried to identify a spot where a car could have made such a turn while maintaining line of sight with the full range in which I saw these lights and I couldn't ID such a spot.

The lights struck me as a source themselves and not a reflection, and although the lights were diffused I had the distinct impression they were 3 dimensional.

I've thought about whether they might have been from a boat passing by, but there was no sound with these lights and it was a quiet night.

Several of the points above seem to conflict with this theory as well, not to mention the speed. They definitely were not the promotional spots that you often see in the night sky. If they were something other than projections, they could have been 3 independent lights in a tight formation, or part of one craft.

I'd estimate the apparent size of each of them at about the size of a thumbnail at arms length. I would not go so far as to say these lights were extraterrestrial, but for me they were certainly UFOs in the sense that I have been unable to associate them with a rational explanation despite years of trying.

Also, I knew a guy who was swimming on Weekapaug's Inn Beach late one afternoon in the summer of 1978 and swears he saw a flying saucer come in off the water, fly straight overhead at a relatively low altitude and proceed inland.

That's all I know of that sighting.

I was 16 at the time of my sighting and was not on drugs or drinking.

I was into astronomy at the time and enjoyed stargazing, hence my reason for being out on the dark tip of the jetty at night away from distracting lights.