Mermaid off the West Coast of Scotland 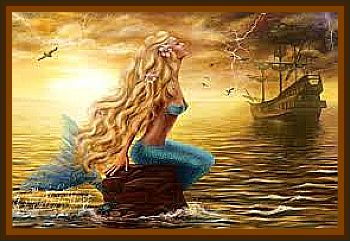 A frightened boy reported seeing a creature half human and half fish, he got nothing but ridicule for his efforts.

A month later a group of children saw what they thought was a drowning woman, whom closer examination revealed to be something else entirely. The upper part was exactly like a woman, the skin appeared very white, and a good deal of color in the cheeks, and very long darkish looking hair; the arms were well proportioned above, but tapered very much towards the hands, which were no longer than a child’s. The tail was like an immense large cuddy fish in color and shape.

Other witnesses arrived, including a man with a rifle that was dissuaded by the others to shoot at it.

The creature remained in sight for 2 hours, at times making a hissing noise like a goose.