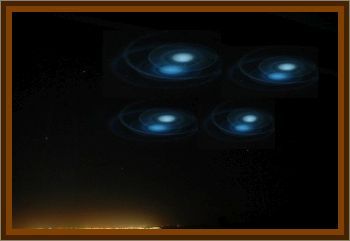 I decided to go for a walk At 10:30 p.m. around August 12, 1961. It was a clear night, not a single cloud. I was on my second lap around the ball field when the entire ball field lit up like a Christmas tree. I tilted my head to see what it was. The object hovered over for about 30-45 seconds. It was about 40' - 50' above me. I noticed the object to be round in shape with one major beam shooting out of the bottom of the aircraft. The beam was so bright it blinded me for a couple of seconds. After studying the aircraft my eyes were focused to the west. Looking out over the trees I noticed there were three more aircraft waiting for the one above me to leave. These three ships all had red lights on the tops of their aircrafts.

I had never witnessed anything like that before. There was nobody else in the ball field at that time. The spaceship made the area so bright I figured it would be on the news or even in the newspaper. No such luck. Nothing. Why was I the only one to see this object? Why was it hovering so close to me? Why wasn't I abducted?

I have thought about that night for the past 53 years. What did they want? I think quite often about the speed that they all traveled and how quiet they all were blew my mind. I wasn't scared at all, just very curious. 53 years later the only thing that has changed is my curiosity. It's about ten times greater now. It was truly an amazing evening.