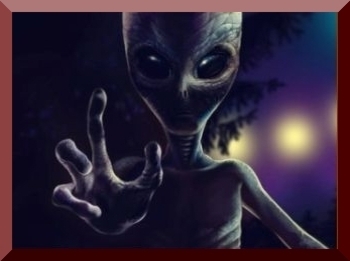 According to Sid Padrick, who at the time of his alleged encounter, was 45 years old, he was walking along Manresa Beach near Watsonville, reportedly because he was suffering from insomnia at the time.

It was nearly 2:00 a.m., and he was a short distance, about 1,500' from his house where his wife and 3 sons were sleeping soundly, when he claimed that something very unusual happened.

His attention was attracted upwards by a noise similar to a jet aircraft at low altitude, but instead of a conventional aircraft, Padrick would later describe seeing a disk shaped craft, like 2 real thick saucers inverted, some 50' in diameter and 30' from the ground. As he watched in wonderment, the object slowly came closer, eventually hovering a mere foot or two above the beach sand.

Padrick recalled later how he began to run toward home, when he heard a voice from the direction of the object. The voice, Padrick stated, told him not to be afraid and that they were not hostile.

Initially, those words reportedly did not slow down his retreat, but then the voice repeated again that they were not hostile, and also invited him aboard.

Padrick claimed that at this point his curiosity overcame his fear, at least somewhat, and he then began to cautiously walk toward the craft.

A door appeared and Padrick walked inside, and soon was conversing with a very human appearing gentleman wearing some sort of flying suit.

The being spoke perfect American English, Padrick noted, and told Padrick that he could call him Xeno, and that he could ask any questions he desired.

It took 15 minutes for me to ask the first question. I was so darned scared.

Padrick did ask what the purpose of their visit to Earth was, and Xeno reportedly stated:

Xeno provided Padrick with a tour of the ship, which consisted of 14 rooms and during the tour Padrick discovered that there were 8 other crew members, one of whom was a woman. All of the beings were about 5' 9" to 5' 10" tall, estimated at 150 to 155 pounds, appeared to be 20 to 25 years of age, and all of them wore 2 piece suits of a light bluish/white color, which just happened to be the same color as the walls.

In fact, each room was illuminated by a blue/white light.

The light seemed to come through the walls, Padrick stated, adding that none of the rooms had any square corners. They were rounded.

It seemed that only Xeno spoke English. During the tour, the other crew members paid little attention to Padrick. They seemed to stay busy at their duty stations, working complicated looking instrument panels.

Though they appeared quite human, Padrick did notice that their faces came to a point more than ours, with sharp chins and noses. Also their fingers appeared to be longer than ours. All of them had very light skin complexion. The men had short, wavy, and dark auburn colored hair, while the woman crew member had long hair, of the same color, that was tucked back under her clothing.

While he was aboard the craft, Padrick believes he was taken for a ride. In fact, at one point he got out for about 3 minutes, and he noticed that they were on a hillside, which he later felt was a location near Leggett, CA, some 175 miles northwest of Watsonville. In fact, he later felt that he had found the exact spot.

At about 4:05 a.m. Padrick was returned and released back where his encounter had begun near Watsonville.

A few days later, on February 4th, he phoned Hamilton Air Force Base and told them that he had witnessed the landing of a spacecraft, adding that he would only be willing to tell them more in person. 4 days later a Major Damon B. Reeder paid Padrick a visit.

Padrick showed the major where the encounter had occurred, and told him the whole incredible story. Major Reeder felt that Padrick, the owner of a TV/radio repair business, a private pilot, and a former member of the Air Force Reserve, was above average in intelligence, and noted that he had an excellent vocabulary, but was put off when Padrick mentioned that he intended to write a book or an article about his experience.

Major Reeder was suspicious and felt that Padrick was making the whole thing up and intended to use the Air Force to make his story appear more credible.

A newspaper story described how the mayor of Monterey, less than 30 miles distance from Watsonville, had seen a bright object over Monterey Bay on the evening of January 29th.

Investigators Jim and Coral Lorenzen felt that Padrick was sincere, but that his experience had been a psychological delusion of some kind. John Keel, however, felt Padrick had been another victim of the so called Earth based ultraterrestrials. He pointed out how the aliens, like angels and elementals of yesteryear, all like to present names that are variations on ancient languages. He pointed out that Xeno, pronounced zee-no, in Greek means stranger.

Ufologist Leneesa Garroutte still remembers when she first met Padrick back in 1965, when he came to Seattle and gave a lecture for the National Investigations Commission on Aerial Phenomena, which was headed by Robert Gribble.

While in Seattle, he stayed with Leneesa and drew some sketches of the craft for her 2 daughters.

Also Leneesa was with Padrick after his lecture and they were riding along in his friend’s Cadillac and Padrick stated that he felt the UFO beings were above them. They pulled over and got out, and saw a ship overhead.

I questioned Leneesa about this, and in a recent email she replied:

When it was over our heads it was a round white form.