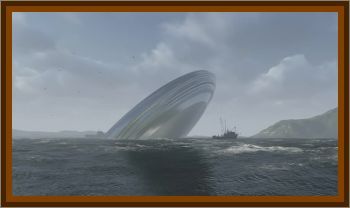 Three carpenters yesterday swore they saw a flying saucer dive into Seneca Lake at Watkins Glen. The 3 said the saucer flashed like a bright sheet of silver across the horizon, then took a nose dive into the lake, kicking up a l0' splash. But state police said as far as they are concerned, they are not going to investigate. They pointed out that the lake is 200' deep In some places, and they do not intend to waste their time with any grappling operations.

Report of two flying saucers over the village was made by Mrs. Marion Granston of 315 N. Glen Ave., Monday morning. She said that the two saucers were seen at 9:30 a.m. just over the top of our elm tree. They were like big silver balls gliding through the air, they were very plain. The 2 balls disappeared over Seneca Lake after proceeding eastward, the woman reported. She added that neighborhood children could also plainly see the saucers. She identified them as William, Ronald & Robert Pierce, who lived nearby. They called Mrs. William Pierce Sr., but she came out too late to see the craft.

The woman who reported the occurrence to newsmen, was told to call Civil Defense headquarters at the office of Atty. Lafayette Argetsinger Jr. A separate flying saucer was reported to have plunged into Seneca Lake Monday morning. The incident was reported by 3 workmen who said the object fell into the lake about 150' off shore near Glen Eldridge on the east side of the lake about 5 miles from the village. They said it splashed water about 8' - 10' into the air. The 3, all carpenters, were Ray Andrew, Alfred Sullivan & Clayton Crout. They told state police that while working near the lake they saw a bright object like a sheet of steel come through the air. Then it crashed into the lake, and splashed water 8' - 10' high.

In the Tompkins County village of Trumansburg, due northeast of here, several persons reported that they saw 5 jet planes pursuing a flying saucer. USAF officials at Hancock Field, Syracuse, said that jets from the base of the 32nd Air Division Defense here were on maneuvers in the Schuyler County area of Watkins Glen but said they did not know they were chasing flying saucers. Air Force officials said they would investigate the Seneca Lake incident. Air spotters in the Schuyler area said they did not sight anything unusual in the area during the day. This is the first time that flying saucers have been reported in Schuyler County.