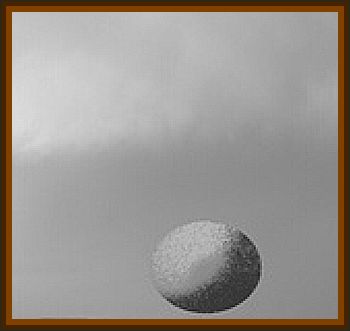 I don't remember the exact date of the sighting, but my guess is around October 1975 at around 3:30 p.m., after school, when I was living in Waterloo, Belgium.

I would have been 15 years old, and was shooting baskets in my driveway when I looked up and saw a metallic looking sphere float silently over my head.

I was an A student and was somewhat of an astronomy and airplane enthusiast.

I found a photo of a doll on the Internet, called Baby Catch-a-Ball, that my then 13 year old sister owned, which I remember looked almost identical to the object. The object was a dull metallic grey and looked perfectly spherical. It did not reflect or glint in the sunlight.

The object appeared to be about 9" in diameter, larger than the toy ball. It followed a perfectly straight line, maintained constant elevation, and made no sound. I would estimate it was traveling at around 5-10 mph, and therefore I was able to follow it easily for a couple of minutes.

On the map, I show the path of the object. It was probably at an altitude of 50' AGL and passed almost directly over my head. What was odd about it was that it traced an absolutely linear path, so I ruled out a balloon or something that could be influenced by air currents. I don't remember there being any wind that day, so its constant speed and altitude were a bit alarming.

It was also odd in that it did not make any sound whatsoever and was able to maintain its constant heading and altitude at such a low speed. I was able to follow it until its silhouette disappeared as it passed the other side of a house, about four doors down and around a corner.

When it was almost directly overhead, I remember being tempted to pick up a small rock and throw it at the object, but then I decided against it for fear I would incite some sort of harmful response. I also remember not calling out to my mother, who was inside the house, for fear of scaring her. So I never told her or anyone else about it.