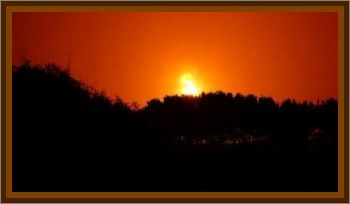 I am reporting an event that happened to my recently deceased grandmother. She was in her late teens at the time of this event, around 1939. She had a habit of telling the same stories from her youth over and over, but this one I was always delighted in hearing as many times as she cared to share it.

My grandmother was in a car waiting with 3 other school mates before a play/musical type performance at her school. They were a bit early, so they waited for someone to come unlock the school door. I'm estimating around 8:00 p.m., but she never said exactly, only that it was after dark.

In those days, there were no street lights out in that remote area, so it was pitch dark.

Shortly after pulling up, they saw a bright light approach from the rear. My grandmother was in the back driver's side of the car, and the light was approaching from the passenger's side rear. They all assumed it was a flash light or car headlight of someone to come open up the door.

The light got brighter, so bright that it filled the car interior with light. It was so bright my grandmother said it was as bright as daylight. They saw a glowing fireball, about the size of a basketball, or large melon, floating by the car, about 2' or 3' away from the car, moving forward on the passenger side about 4' above the ground at a slow walking speed.

She said it was a great big, perfectly circular ball of fire, yet it made no sound. The girl next to her screamed, and they all got concerned. They waited until it passed, and then the two guys in the front of the car got out and followed it. My grandmother and her friend waited in the car, scared to go outside.

The fireball drifted into the woods and eventually out of sight, and the guys came back and said it had disappeared.

Its height, size, color, brightness, or trajectory never varied, and it moved smoothly the entire way. It truly perplexed them all, and they would mention it over the years.