UFO (Sphere) Spotted Over Many Towns In Washington State 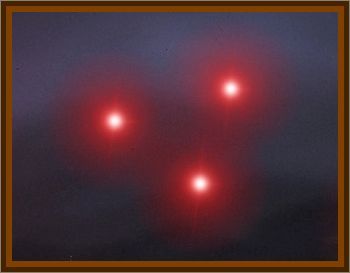 From between approximately 9:20 p.m. and 9:30 p.m. PDT, one or more objects, variously described as a blue green sphere, an oval of blue green light, or a disk with six lights on it, was reported from multiple points throughout western Washington State. The object was reported to change direction of flight on at least three occasions, to execute a rolling maneuver on at least one occasion, to come to an almost complete stop in two locations, to reverse its general course of travel from south to north, and to change its appearance, including its color, on at least two occasions. One reliable observer witnessed the object to pass slowly over the center of Bangor Submarine Base on Hood Canal, approximately 20-30 miles to the west of Seattle, passing directly over the underground bunkers where nuclear weapons are thought to be stored.

1. Snohomish County, WA: A 16 year old male and his mother, located approximately 15-20 miles north of Seattle, witnessed a blue green object suddenly descend from the sky, hover, and then accelerate to the south southwest and disappear in that direction at approximately 2120 hrs. (PDT).

2. Poulsbo, WA: Larry Swanson, a former federal employee and computer specialist, who resides approximately ¼ mile from the northeast corner of the Bangor Submarine Base, allegedly witnessed a brightly lighted, disk shaped object glide silently over the center of that military facility at approximately 2122 hrs.. The object tilted somewhat, so the witness was able to see the ventral side of the object quite clearly, he reports. A computer generated graphic, provided by the witness, is shown above.

3. Auburn, WA: A man out walking his dog witnessed a perfectly circular, blue green ball of light descend from north to south in the western sky at 9:20 p.m. at a very high velocity.

4. Puyallup, WA: A man driving to work witnessed a striking blue green ball of light descending at a 30-35 degree angle from north to south in the western sky at a very high velocity.

5. Shelton, WA: A young father witnessed a blue green ball of light streak across the sky to the west of his location.

6. Oakville, WA: A mother and her two sons, driving west on State Route 12, located to the west of Interstate 5, witnessed a disk shaped object, imbedded in a cloud of blue green light, streak from north to south in the western sky. The object appeared to follow the contour of the horizon, dipping down suddenly, and then rising up again during its rapid flight to the south. The object was reported to generate a peculiar tail, which streamed off the aft end of the object for a fleeting instant. All three witnesses believed they observed three lights on the top of the disk, and three lights on its ventral side, as well.

7. Steilacoom, WA: A woman witnessed a blue-green ball of light streak from north to south in the western sky at 9:23 p.m.

8. Vancouver, WA: A husband and wife witnessed a blue green ball of light move slowly from north to south in the western sky. Very peculiar appearance to the object, they reported, with a peculiar looking mist surrounding the object.

9. Portland, OR: A young musician witnessed a blue green ball of light move from west to east in the northern sky from his vantage point in the city of Portland, OR.

10. Vancouver, WA: A male Ph.D. in computer science, driving north on Interstate 5 witnessed a blue green ball of light, that seemed to him to descend vertically ahead of his automobile and hover momentarily above the highway. The witness added that he had experienced some very unusual emotional reactions to the event.

11. Yakima, WA: A law enforcement officer witnessed a blue green ball of light moving at a very high velocity from south to north for approximately 2 seconds. During his sighting, the object suddenly changed its color from green to red. The sighting occurred at 9:30 p.m., the witness thought.