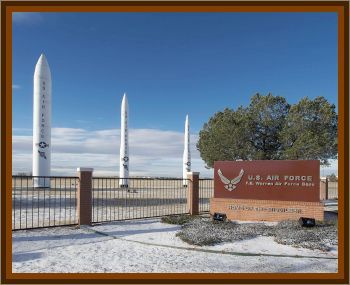 My name is Bruce Fenstermacher.

I was a captain in the US Air Force and Minuteman III Combat Crew Commander from 1974 until 1977. I was stationed at FE Warren AFB Wyoming and assigned to the 400th Strategic Missile Squadron. I was, and still am, a skeptic and at the time did not believe in UFOs.

In the fall of 1976 my deputy and I were on duty at the Romeo Launch facility, or LCF. The LCFs at FE Warren were assigned alphabetic characters A through T. The LCF was the part of Romeo that was above the ground. The Launch Control Capsule, or LCC, was where the crew members did their jobs, safe and secure 50' below the ground and behind an 8 ton door.

In order to stay wide awake we were monitoring the VHF radio communication between the LCF topside security NCO, officially called the Flight Security Controller or FSC, and the Security Alert Team, SAT members. The SAT members were doing routine checks for the 10 missiles Silos, officially called Launch Facilities or LFs.

At approximately 2:00 a.m. the FSC called the SAT and requested that they pull over, get out of the vehicle and look around to see what they could see. Not telling them to look at any specific direction or give them any other guidance. A few seconds later they reported that they saw nothing and then suddenly said that they did see something in the distance. The FSC asked them what they saw and a SAT member replied in an excited voice that they saw a light in the sky. It was a bright white pulsating light with other colors visible between pulsations. The FSC asked them where this light was located and the reply was that it was some distance to the north and, after a short pause, that it looked like it was near the LCF. The FSC then asked the SAT to return to the LCF.

My deputy and I looked at each other and kind of did a double take. I got on the direct line to the FSC and asked him what was going on. His reply was that right above the LCF there was a silent object with a very bright white pulsating light. Between pulsations he could see a blue light and a red light. I asked for specifics and he said that it was shaped like a fat cigar and was about 80' to 100' above him and appeared to be 40' to 50' long. He said he called the SAT to make sure confirm his observation. While we were talking he reported that it was slowly and quietly moving away to the east.

I asked him to keep us updated. My deputy and I talked about what we should do with this information. In a few minutes the FSC called back and said the object stopped a few miles to the east and appeared to be above the closest LF. We ordered the SAT to go to the LF that had the object above it. They said that they had to return to the LCF for fresh batteries for their flashlights. Ten minutes or so later we asked the status of the SAT team and were told that they had made it back to the LCF but had not yet departed for the LF. We were told that they were just about to leave and would be there shortly.

The object moved further east to approximately the location of another LF. We again ordered the SAT team to that location and they reported that they had to gas up the truck. It seemed to take them a long time before they appeared to be on their way.

Shortly after the object went to the first LF we reported the incident to the SAC command post at FE Warren. The NCO that took the call laughed at the report and said to call him back when the thing ate the SAT and hung up. As well as logging all the activity in the official log, my deputy also started taking personal notes detailing what transpired.

At our next hourly 400th SMS crew check in for flights Poppa, Quebec, Romeo, Sierra, and Tango we told the other crew members about our object and received laughter and an attitude of general disbelief. Right after the group communication, the crew from Quebec called, they were the team we had dropped off on our way to Romeo, and stated that earlier that morning they had a similar object above a couple of their LFs. When asked what direction it was headed they said that it appeared to be heading towards our area, Romeo. We asked what happened when they reported the incident the answer was: Are you crazy? We didn’t report it we would have been laughed at. They also mentioned that the SAT team that they sent to one of the LFs had an accident leaving the LF and the Quebec crew seemed to find humor in the SAT accident.

We contacted the FE Warren SAC Command Post a few more times and finally asked if this incident had been entered into the log. They said it had not. I asked for the officer in charge and stated that if they did not enter it I would wake up the base commander and report it directly to him, now about 3:00 a.m.. Shortly after that we got a call form a senior NCO at the Command Post asking for specific details about the incident.

The object moved to another LF and the SAT team never made it to that one either. Our FSC kept us appraised of each movement and reported that at 4:00 a.m. it moved away very rapidly to a star sized object and then disappeared.

The next morning we were relieved by another crew for our normal return to FE Warren and when we went topside we found the FSC curled up in a chair. He too had been relieved by the day FSC but said that he was unable to sleep and was obviously very distressed. The SAT members were conveniently not at the LCF.

My deputy and I were both prior service, had enlisted time before becoming officers, and had a good rapport with our FSC. We asked about the difficultly the SAT team had about getting to the LFs in question. After promising not to report the SAT, we were told that they said the SAT members were not going to any LF that had that thing over it and, in fact, had never left the LCF area.

We picked up the crew from Quebec and on our return trip to FE Warren and discussed the excitement of the early morning hours. They insisted they would NOT report the incident ever and if we included them in our report they would deny it happened.

Upon our return to the 400th SMS we discussed the incident with our flight commander. The next morning we were called in to the 400th SMS commander’s office. He asked us about the incident and when he learned about our personal notes he asked to look at them. Once in his hands he tore them up and said we were never to talk about this again and required us to sign documents that seemed to say we would not talk about it. We reluctantly signed them.

At our next couple of departure meetings an officer in uniform, not a crew uniform and not someone we recognized, briefed all the crews that this incident was classified and officially never happened and that no one should talk about this again.

After a UFO press conference in September 2010, I was given a name of a former Quebec team SAT member that wanted to talk to me. I contacted him, heard his story and am confident that he was one of the SAT members on duty the night of our incident at Romeo. This is what he told me:

As they approached Quebec 9, they saw a bright pulsating light with a beam of light extending down to the LF. While attempting to accomplish one of the checklists for the LF he actually reached into the beam. That action spooked both of the SAT members and they jumped in their truck and as they raced away from the LF they had an accident and the truck was damaged, but drive able. When they went back to FE Warren they were ridiculed by other Security Policemen after they reported the incident.

To this day he is upset about the ridicule. Once he finished his story he said he was very relieved to talk to someone else that was involved in that incident. I asked him to share his story with others and make a formal statement but he said that This was it. He was done and would not talk to anybody about it again, Including me. And he has not responded to any calls or emails from me.

I kept silent about the 1976 incident, a good officer follows his/her orders, until I caught Larry King live on a Friday night in July of 2008 and saw a former AF officer talking about a similar situation. I did not hear the beginning of the segment and I assumed that he, his name was Bob Salas, was one of the crew members at Quebec until the date was discussed. It was in 1967 and was at Malmstrom AFB, not FE Warren.

A skeptic on the show did not believe Mr. Salas’s story and seemed to doubt his credibility, and perhaps sanity. After much thought, months later I contacted one of the other guests on the show and officially told my tale. And here I am.