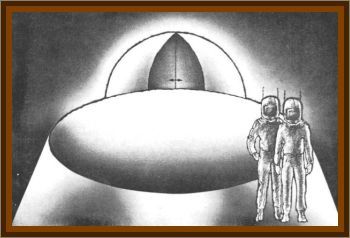 Driving toward Warneton, along the French-Belgian border, the witness experiences the failure of lights, engine, and radio. He saw a landed object 490' away in a field to his right, the UFO was shaped like a WWI British helmet, was about 28' wide and stood on three legs, and had patches of orange luminescence on top with a white light underneath.

Two beings were seen coming from the direction of the object, walking slowly and stiffly toward the car. The shorter entity wore an outfit with horizontal rings around the torso and a round helmet with a large, circular face plate showing a pear shaped, grayish head with no hair, round marble like eyes, a rudimentary nose, and a slit like lipless mouth. It held an object like a short thick ruler with a pointed tip, aimed at the car. The taller entity wore a cubical helmet transparent in form, showing a face identical with the other’s but with a small rectangular box under the chin. Its suit was dull metallic gray of a one piece coverall type, including gloves and heavy, pointed boots. It wore a black belt with a luminous disk in front and a diagonal Sam Browne strap from belt to shoulder, with a vertical row of buttons on each side of the chest.

Both beings had long arms.

The interior of the helmets appeared to be illuminated.

A third entity was seen standing guard near the object. The two beings approached to within 12' of the car and the taller was seen opening and closing its mouth.

The witness felt a slight shock on the back of his head and heard, simultaneously, a low pitched, modulated sound. The two suddenly wheeled around and walked quickly back to the object, which now pulsated an electric blue color on top. The three beings boarded, the legs withdrew, and the object rose slightly, hovered, then ascended rapidly at a 60° angle.

A car was then seen approaching, whose driver said he had seen the object and its occupants. As the primary witness drove off, he continued to get poor reception on the car radio.