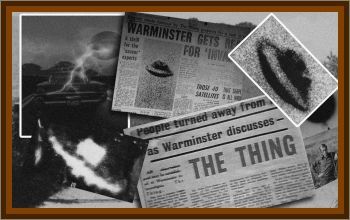 There are, a number of strange reports from the English town of Warminster dating back to the start of the 1960s and the “Warminster Thing” as it became known. But it is generally accepted to have started early on Christmas morning in 1964 when a loud high pitched menacing sound was heard by Marjory Bye on her way to church. The sound was so intense that she could feel it pounding in her head, neck and shoulders. Reports of these sonic disturbances came in from all over Warminster. Witnesses talked of “the thing” .No one had seen the source of the sounds. Some were even been knocked to the ground from the noise.

By June 1965 flying saucers were seen, cigar shaped objects, fireballs, huge mother ships and scout ships. Over the 1965 August Bank Holiday a public meeting was held to allay the fears of the populace of Warminster.

Local journalist Arthur Shuttlewood assumed these sightings were of Unidentified Flying Objects, UFOs. Arthur eventually became a hardcore believer, expressing passionate views on the alien manifestations of Warminster and coining the phrase “The Thing”. He later authored a book in 1967, “The Warminster Mystery”, on the experience and was instrumental in making the phenomenon national news.

Gordon Faulkner took the famous photo of a Warminster UFO used on the cover of Shuttleworth’s book. He sent it to Shuttleworth, who had the Daily Mirror reproduce it, on Sept 10th 1965 along with an accompanying report. The “Warminster Thing” became national news. Interest grew from afar and BBC even produced a TV documentary “Pie in the Sky” shown in 1966 covering the story.

Arthur Shuttleworth meanwhile claimed he had been receiving phone calls from alien occupants of the craft in his book. Although he did admit these calls could have easily been faked he later went on to claim that an Aryan looking human being visited him and revealed the calls were real. Sightings continued on a regular basis finally fading to almost nothing by 1977.

With the army based on nearby Salisbury Plain, Warminster is a well known military town. This gave rise to a theory that the noise and the sighting could have been caused by secret experiments. But believers disagreed that the military were one of the reasons Warminster had been chosen for visitations. Whatever the reason for the coming of The Thing, it certainly put Warminster on the map and remains a major piece of British UFO lore.