UFO Seen by Many in Namibia 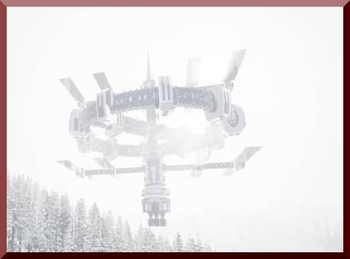 This same object was also seen one month earlier. It was described as having a top, with a round ball underneath, that shone brilliantly. 2 light extensions were also shining and shot off something which looked like sparks.

This strange phenomenon, illustrated, was observed August 16, 1976 at approximately 6:30 a.m. in the sky over the wilderness in Walvis Bay.

Several people notified the Namib Times about the appearance of this strange phenomenon, which disappeared around 7:30 a.m. in the sky. No one can say for certain what it was.

This same craft, or one like it, about a month ago, had the fishermen at sea guessing about it.

One of our readers, Mr. Dieter Krauer clearly observed the top, with a round ball underneath, shining brilliantly.

The two light extensions were also shining and shot off something which looked like sparks. Mr. Krauer also said that he took some photographs of the strange phenomena, but he believes the distance was too great.

Several other people, among whom were two non whites, also described the phenomena, as in the sketch above of the Namib Times.

Some people referred to the phenomena as a Space Monster, and said that with the rising of the sun, the Monster faded and later disappeared completely.