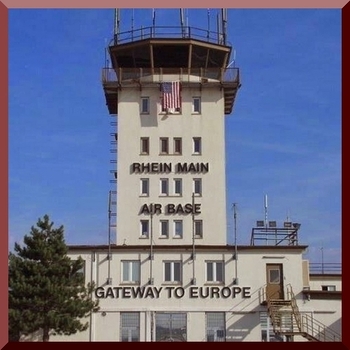 This is a description of 2 incidents that occurred while I was stationed at Rhein-Main Air Base. I was there between 1978-1983.

Sometime in the summer of 1980 I was sitting in the backyard with a Lt. Col in the Air Force, a Danish engineer and 2 German stewardesses at their apartment on Otto-Hahn Strasse in Walldorf, they had a bottom floor so they had a small yard.

I just happened to glance up and noticed what I thought was a commercial jet flying several thousand feet up. I thought it was a jet until I noticed that I could not see wings or a tail. I mentioned it to the others who also saw the object, cigar shaped with what may have been windows on the side, that’s why my mind grabbed at a commercial jet. Since it was headed towards the sun my second thought was that it just they way the sun reflected on it but the Danish man grabbed binoculars and saw that there were no wings. The 2 stews became very upset and did not even look at the object as they stated they had seen enough UFOs for a lifetime and did not want to talk about it. I am sorry that I do not remember their names.

The second sighting the next year was really several weeks of sightings. It's kind a funny because everyone at Rhein-Main knew about it and watched them for a while before it became boring.

There were 2 objects above the airport, since it is shared with the Frankfurt Flughafen, that were seen every night. They were straight up and looked at first like a star or planet until they moved. They would dart back and forth and would do a L shaped maneuver without stopping. My now ex-wife’s brothers came over for a visit from the states and I told them the story of the UFOs and they laughed. I took them outside where I worked and without knowing if they were still up there told them to look up and there they were. It scared both of them pretty badly that they would not look up.

If it helps with credibility I was stationed with the 1945th Comm Group. I was involved with the Return of the 52 hostages from Iran in 1981, one of the aircraft seen in the pictures tail was 10T4 as I was the radio operator. As I said, for part of my time there I lived on Otto-Hahn Strasse in Walldorf, a short time in Worfelden and some years on the base at the housing area.

Anyway, I have held these memories long enough and hopefully someone will come forward with pictures or verify the story.