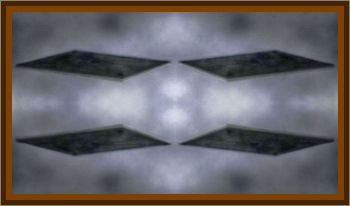 The flight of the objects was wavering with a slight variation in altitude. The objects were seen through 7x50 power binoculars for about 20 seconds, and 30 seconds without binoculars.

A second sighting took place of a long round object that looked like a large stovepipe 9' in diameter with a long trail 750' long and was seen for 60 to 90 seconds. The object made a complete 360º turn described as a horseshoe shape. During this period like objects were reported from civilian air control personnel at Carlsbad and Hobbs, NM., Wink, TX. and a pilot of a Continental Airline Flight 184 near Hobbs, NM.

On the morning of November 7, 1957, a family driving on Route 54 near the White Sands Proving Grounds area, NM, saw a large silvery cylindrical or oval shaped object traveling out of the northeast at about 10,000'. They watched it for approximately 3 minutes before the object disappeared over the Organ Mountains to the southwest.

The object was traveling at tremendous speed.