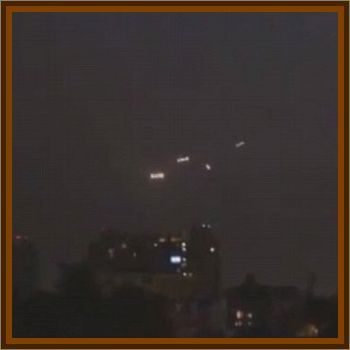 This footage shows Four Sets Of Glowing Lights Floating Above Santiago, Chile. With witnesses saying it was a fleet of UFOs.

The strange flying objects were seen above the city of Santiago, Chile and were captured in a 5 minute clip. Video is not in English.

A girl sitting at a desk introduces the footage before the camera whirls around to point out of her bedroom window where the objects are seen flying closely together in the dark sky. At first they float in the distance in a strange formation, before spreading out and disappearing from view completely.

The clip, which is labelled: Fantastic UFO sighting in Santiago, has raised eyebrows with some backing the sighting and others less than convinced.

This seems to be very real, added one poster.

Another wrote: At first I thought it was just Chinese lanterns tied together but those things are moving fast.

Some rubbished the claim and suggested the lights could just be drones flying over the city.

Chile is no stranger to UFO sightings and the Andean town of San Clemente in particular has become the country's capital for the flying objects. The reports often involve shining spheres disappearing into water or woods in the area. Fans of extra terrestrial life can even go on a UFO trail that stretches out 19 miles, passing through the Andes, and can require hours of riding on horseback. One area of the trail that has specific importance to UFO hunters is El Enladrillado, an elevated site made of volcanic stone blocks that’s rumored to be a landing pad for flying saucers.

The UFOs look like series of four lights floating together in the distance.