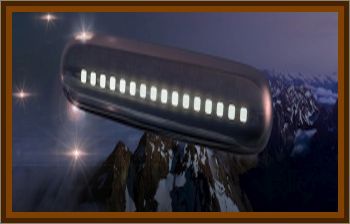 In the spring of 1964 I was living with my mother, brother and my mother's female roommate.

I was very young but remember the event vividly what I do remember of it. Our house was located in a rural Vermont community called Walden. The road I lived on had a railroad trestle and our house was gray. There was a dirt road that ran beside the house running around the property to another house where an elderly lady lived.

One spring evening, I was walking down that road and saw a large silver cigar shaped but larger in the center object fly by right next to me in the field by the road. It was completely silent and very large. It was moving incredibly fast and almost floated by.

As soon as the object passed, the next thing I remember is waking up in the barn on our property lying in the hay. I had no memory of how I got there and was awakened by my mother who had been looking for me for several hours.

I didn't tell her about what I had seen or anyone else until now. I am now in my 50's and the memory of what happened has haunted me my entire life. I'm hoping someone else saw something around that time period, so I have some sort of confirmation.