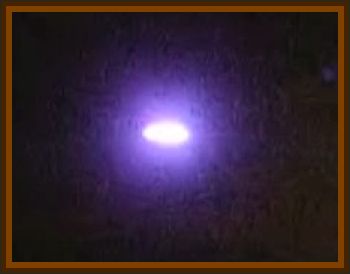 She’s been laughed at, harassed and ridiculed, but the 18 year old Davenport woman knows what she saw on that crisp, clear night.

She declines to be identified for fear of jeopardizing future employment opportunities. What she saw, she says, was a pair of bright headlights flashing from an oval object moving silently through the skies over Walcott, Iowa, where she worked as a security guard.

Gliding toward her as she manned a watchtower at the town’s French and Heeht plant, the disk obscured a flashing red beacon light on a grain elevator. Her radio and walkie talkie stopped working, and cows and crickets in a nearby field stood silent. A light sensitive mercury vapor lamp about 300' away. the woman went dark. A television in a nearby farmhouse went blank, she learned later.

At first I wasn’t sure what it was, and I just sort of stood there and watched it, she said.

She thought it was a helicopter until she realized it made no noise. Terrified, she stood frozen outside the guardhouse and watched, Then she went in search of other witnesses. When she returned, the object was gone.

But the woman says few people have believed her story. They look at me like I’m nuts, she says. It’s like somebody telling you that they’d seen a green elephant.

Her boss told her to report the incident to police, but she says the Davenport policeman in charge and three other officers laughed hysterically when she told her story.

They did, however, call the Center for UFO Studies in Evanston, which connected her with DeGraw. Despite the widespread disbelief, she’s still convinced the sighting was not a mistake. I know what I saw, she says. I’m not blind.