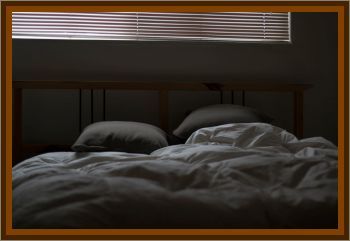 This 37 year old was sleeping when she suddenly found herself standing on a street corner, no cars were around. It was late at night and there was another girl standing near her, to her left side. She did not know her. She felt as if she was waiting for something but did not know what exactly. The intersection reminded her of one in North Dakota where she had lived a few years ago, because the surroundings were flat unlike Lexington Park where there are lots of trees and hills.

She looked to the sky and saw a dark object resembling a dark sphere without lights. She soon realized that it had been far away because it suddenly grew in size as if approaching. She had to tilt her head back to see the object completely. It was black underneath, she never saw the top of it. She remembers noticing light around her but does not recall seeing actual light bulbs or lights on the underside. She couldn’t tell the exact shape because the thing was high over her head and it was dark.

Her next memory was being in a small room. The lights were dimmed and it all seemed to in muted tones. She then realized that the other girl was not with her anymore and she then asked this female creature where the other girl went. The female alien let her know without speaking, obviously using mental communication. She described the female alien as very thin, and not much shorter than herself, maybe about 5’2” in height. She appeared to have been wearing a blonde wig with a style of that of the 60’s.

The humanoid attempted to calm the witness letting her know that she was not dreaming. She got the feeling that the humanoid was very pleased and was almost laughing, but her expression never changed. The alien then asked her if she was now ready for the tour.

She followed her out of the room into a hallway. She remembers that the hall was a silver gray maybe a metallic color. It was much brighter in the hallway, again she saw no lights but there was light all around her. They walked for a little bit and she has a vague memory of seeing some sort of elevator in the center of this large open room when they walked around a corner. It just opened up and it was huge and beautiful resembling the center of a mall, she thinks that there were plants around. She continued to follow the alien female and then entered a room which was also enormous. It had hundreds of chairs in it. They appeared similar to those that have the metal on the outside in the shape of an S and then the seats were plastic. The seats were located in the center of this very large room. There appeared to be glass windows or shiny metals to her sides.

The alien then communicated with her telling her that she hoped that she was pleased. She got the impression that she was being rewarded and she felt that the alien was going to let her see her grandparents, which were dead. She had noticed when she first entered the room that there had been photos with peoples faces on them sitting on the chairs. There were hundreds of them, of all races and varying ages. Towards the rear of the back rows they stopped and then the alien motioned with her hand for the witness to go into the row of chairs.

She then felt that the alien was proud of her. She was feeling happy but at the same time confused when the alien told her to stop. She stopped and looked at the photos on the chairs. The alien seemed to sense her confusion and the witness felt her mood change. That scared and concerned her. The alien asked her if she knew those people but they were Indian, not Native American but Indian. She said no. And then the alien female’s mood went icy cold, the witness felt nothing from her and worried that she had somehow displeased her.

Suddenly several shorter, twig like gray beings were around her, encircling her and they were kind of pushing her down to the floor. As she lay on her right side she saw a needle coming toward her with what appeared to be orange liquid inside. They inserted the needle in her arm and she was suddenly awake on her bed with a sore left upper shoulder. There was a small bruise and a pin prick mark on her shoulder.