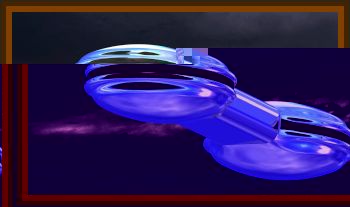 At approximately 3:00 a.m. CST, while driving Eastbound on Interstate 70, at approximately milepost 129, within the jurisdiction of Trego County, Kansas, an object which I can best describe as 2 spheres about 20' or so in diameter, connected to each other by some type of rectangular device, dimensions unknown.

The object had no discernable color, and my high beam headlights seemed to partially become absorbed by the craft and part of the white headlight field simply illuminated the object.

From my very brief encounter, all told about 6 seconds, I could also not visualize any portholes, antennas, doors or other openings or protrusions. My bearing to the craft I am estimating to be 35' AGL, above ground level, and about 35' to 50' horizontally from my vehicle. My angle of view out of the windshield was between 30° and 45° upon initial visual contact and, of course, became markedly closer, as I estimate our closing speed to be around 175 mph…I was driving 75 mph and I believe the craft to be cruising at around 100 mph, this is a purely conjectural guess on my part.

Please note that the very first thing I did was to telephone the McConnell AFB Command Post, located in Wichita, KS, and inquire as to any Military air traffic of any kind in this area, such as Medevac flights, other Helos or fixed wing aircraft of any sort in the known military inventory.

The Airman I spoke to at the Command Post also volunteered that no Civilian Air Traffic was aloft at that time, at my location, either.

I also spoke with a Sgt.**** at the Trego County Kansas Sheriff’s department, who checked the comm traffic logs from that time and found no other reports. He was, however, very interested, and did not believe I was anything but honest, truthful and forthcoming.

My background is varied. I worked for one year as a NASA contractor, on the CCMS program, Checkout, Control and Monitoring Subsystems, in the very early 1980s, for the Space Shuttle Mobile Launch Pad, where we designed and tested cutting edge electronics for the Mobile Launch Pad equipment which handled all data from the Orbiter and Astronauts, and sent that data to both Mission Control and to the Firing Room at the Cape.

I assisted in some elementary designs, and built, along with the other Techs in the lab, the initial prototypes of all the equipment for CCMS, and then, working with the design Engineer, debugged the equipment and finally produced wiring and assembly lists of instructions for the production department.

Note that a good deal of our Prototype Equipment went into use without building other production models. My last assignment was to completely revise the Approved Parts List, actually consisting of 2 separate released engineering documents…one containing all mechanical hardware, such as nuts, bolts and so forth, and the other containing all electronic parts approved for use in the program.

These documents went to all NASA facilities working with CCMS/Orbiter projects, and finally to other contractors and subcontractors.