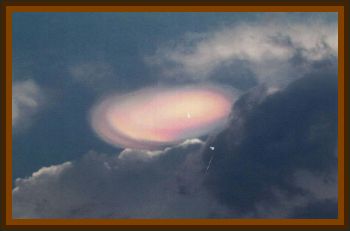 Viewed from a large open field.

2 fuzzy glowing orange lights, aligned horizontally, about 45° from the horizon, grew gradually larger and brighter, and merged into a single enormous trapezoid shape, at least 15 to 20 times the size of a full moon. Not a distinct object. It remained a fuzzy edged bright orange light. There was no sound.

Scared, I went inside. My friend claimed that the light gradually shrank and disappeared. When I went out again, maybe 10 to 15 minutes later, there was just a faint glow in the sky.

My friend, who'd lived there several years, said he'd never seen or heard of anything like this.

I'm a professional photographer, but was too scared to photograph thisphenomenon, a big regret. I was age 23.