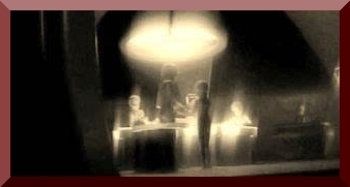 Tammy claims that at the age of 24, she underwent an alien abduction experience in early March 1973 near Waco, TX.

The story began when she had completed her late night shift as a waitress in a diner situated approximately 30 miles outside of Waco. It was at around 2:00 a.m. of the day at issue, and she was driving toward the city and back to her small apartment.

On a lonely stretch of road, and after having driven for no more than about 15 minutes, Tammy began to feel strange, like I had been drugged or was in a dream, better known as The Oz Factor.

My ears hurt, everything I could hear, like the cars engine, sounded muffled.

More alarming, however, was the fact that she began to feel distinctly light headed and dizzy, which quickly turned into a violent form of vertigo, accompanied by acute nausea. Despite feeling seriously ill, Tammy finally made it back to the safety of her home. Just like Betty & Barney Hill, however, there was a significant period of lost time, 3 hours of her life were completely gone. Over a period of several subsequent nights, however, she experienced a series of vivid and disturbing dreams that appeared to fill in at least some of the missing pieces of the jigsaw.

In the dream, I would always see these two small figures coming to my car, and my engine & lights going off, as the beings got ever closer, I could see that both were around 5' tall, possessed thin faces and cheeks, and were attired in light blue, one piece uniforms, and tight fitting caps. I could only sit in the car, with a heady mixture of awe and fear, as one of the figures opened the drivers side door. The 2 entities then dragged me out of the vehicle and proceeded to carry me by my ankles and wrists to the craft. My next memory was of being stripped of clothing and laid out on a cold hard table with 5 - 6 similar people or things standing around me.

Alarmingly, Tammy recalled that some sort of cold, metallic device was placed into her right nostril and removed after a few minutes. As this distressing activity was occurring.

A small machine hovered over me like a big eye, and made a humming noise that made me feel very sick.

Her next recollection was of being dressed, then carried back to the car and placed into the passenger seat. The bizarre encounter was over and the aliens were gone.