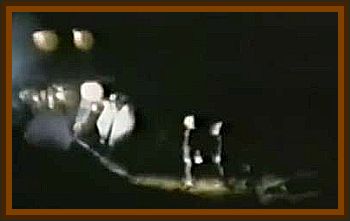 4 of us had a UFO encounter with a saucer shaped craft.

I was 7 years old, my brother was 6 and my baby brother was 9 months old. My 14 year old cousin was babysitting us while my mother was out for the evening. We lived off the lake in Wabasca, AB, Canada. It was dark outside and I recall seeing many colorful lights hitting the inside of the trailer walls. I found that quite odd because from the direction of the lights, there was no street lights, just the lake and part of my grandmother’s property. This was a very secluded town, no street lights or airport. I remember walking over to the window, at the same time I can hear a strange high/low noise. It was getting louder and louder.

As I looked outside I couldn’t see the stars. I saw a huge black circular craft hovering right above us, approximately 30' off the ground tree top level. The size of the craft covered my grandmother’s house and our trailer, and most of her land. As I looked up and saw the underside of the craft, I recall it being black on the underside, and the colors shining outward were coming from the edges of the craft. My cousin screamed. We all panicked and screamed and cried.

I recall the intense noise, it was ear piercing, nothing I did would block the sound that was hurting my ears.

My brother recalls vividly the trailer shaking violently. He said that this is what scared him the most. He recalls things falling off the table and shelves. I recall my cousin running back and forth, and hearing my baby brother crying hard in his walker. I tried to block the sound with a pillow from the couch. The next thing I recall is my cousin screaming for my brother. I looked around for him and he was gone. The trailer door was open. I looked outside again and saw him standing right under it, inbetween my grandmother’s home and our trailer. He looked frozen. My cousin was screaming his name, he didn’t hear her.

The next thing I remember is sitting on the couch looking out the window. This time the craft was hovering above the lake about 100' in front of my grandmother’s property. I can see it clearly.

It was saucer shaped with a belt of colored lights/rays circling the mid section of the craft. The lights were a rectangular shape and they circled in a slow/fast motion. At the same time there were 3 white beams shining from the underside of the craft.

At the age of 7 I thought it was landing on the lake. Moments later, my mother walked in. I thought she saw the UFO and came home early, it was too early for her to be home, but it was the scheduled time she was to be home about 10:30. I remember being confused because I thought time had sped up. For many years I thought this, until I learned about missing time.

My cousin was curled up in a ball at the corner of the trailer and my mom was angry and said whats going on here? Why is your baby brother crying so hard?. She picked him up to console him, but as his scared cries started to slow down, he started to gasp for breathe.

We were all still crying and my baby brother’s eyes rolled up and he had a major convulsion. He shook violently and his eyes were white, and we all screamed again. We scared my mom and she kept calling out my baby brother’s name. Then he stopped breathing. My mom cried and I covered my head with my pillow. She tried CPR and nothing happened and then my grandmother came over and she couldn’t do anything. We all ran to my grandmother’s house and they laid my baby brother on the kitchen table.

My aunt entered the room and she managed to revive him, but, she said that she first had to scoop out a thick white foam from his mouth. Being a nurse, she said:

It wasn’t the usual or typical foam that people have when they have convulsions or seizures. After nearly 5 minutes he was fine. However he did suffer some minor brain damage due to the lack of oxygen to his brain. That night, he was admitted to the Slave Lake Hospital and the admission date was October 7, 1979.

The explanation the doctor gave to my aunt was maybe he had a bad reaction to aspirin. Yet he was not sick and didn’t have asprin that night. My cousin has no memory of the encounter, but remembers vividly the events of my brother’s near death. My brother recalls a few chopped things.

After doing interviews with people from the area, I found out that there were over 50 people who witnessed this event, and the hundreds of other sightings and ufo landing spots. The RCMP were called out to my grandma’s house and a train of vehicles followed. I tried to contact the RCMP and get information about this but no one responded to my call and email request. In the interviews I found there are hundreds of unreported sightings, experiences with other paranormal events, related and unrelated to UFO’s and abductions, ufo landing spots.

In fact, when I was 9 or 10 years old I remember walking through a field of high grass close the the edge of the lake. I remember coming to a clearing of burned grass, in a perfect circle. I remember saying:

Wow, who did this? How did they burn it in a perfect circle?

I was told that a UFO landed there as well as dozens of other spots in the community, one being my great aunt’s property. A year later, I walked over the same spot and found the large dead area. Nothing grew in that spot again. It was a dead area. The other landing spots had the same dead spot. There are still some of these landing spots today.