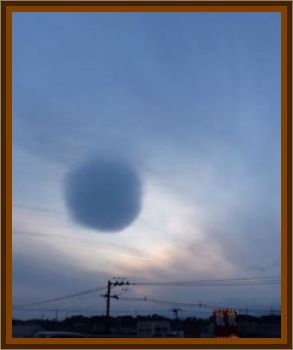 Mrs. Jane Doe was walking through her fields in the woods located behind her home. Deep in the woods she heard a gentle purring sound, a smooth but high pitched purring. She walked across a deep a small embankment as she climbed to the top she saw on a ridge a faint bluish light in the woods. Thinking it was a poacher she slipped nearer and saw a huge faint bluish light sphere about 10' in diameter resting on the ground, somewhat resembling a cloud of bluish light. The sphere dimly lighted the trees around it.

Two shapes were silhouetted in the gleam. The shapes appeared to be between her and the sphere.

She watched in silence, crouching behind a tree trunk. It seemed that the two men were burying things on the ground, they moved around constantly and appeared to be digging up the soil.

She now noticed that the cloud like blue sphere was hovering just above the ground. The men walking in front of it seemed human, except for their slenderness, their thin long arms and a quite small head. The head was very rounded around the backside. On the side of their heads they wore one or two small square boxes. Their head was covered in a tight fitting headgear, which accentuated the roundness of their heads.

All of the sudden a little man came out of the sphere; he seemed to step briskly out the gleam, stood in front of the sphere and looked at the other figures. He raised an arm as if looking at a watch turned around and disappeared back into the sphere.

Her memory became confused from that moment on, but she saw a flash from behind the sphere, and thought that the men were setting fire to the woods. One of the men ran around the glowing sphere and fell to the ground. The other walked briskly and appeared to watch the glow behind the sphere extinguish itself. Suddenly she saw two more men on their knees near the fallen figure and then carry him up behind the sphere. Immediately after that another man came out of the glow. He was holding objects in his hands and another item under his arm. He ran towards the witness and stopped about 35' from her, putting something down on the ground. She heard a noise resembling the rustling of leaves as if the figure was covering something on the ground. The man looked around and then returned to the glowing sphere.

The purring sound became louder and the light intensified. The sphere then began to balance itself over the ground in a pendulum like matter. A shower of sparks was seen coming out of the soil, everything in the area seemed to sparkle and strong wind like sound was heard. Then everything vanished. The panicked woman then ran home.

The source was not allowed to remove any of the items.

The family of the witness requested anonymity.