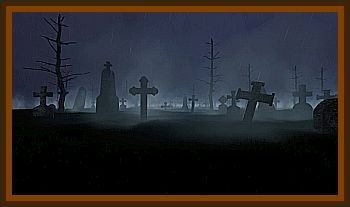 Many years ago I had a very strange occurrence that I will never forget. I hope never to be in any kind of situation like this again.

When I was younger around 18 or so I lived up the street from an old cemetery. I would sometimes go hang out with a friend at that cemetery and I never had an issue with it. There were woods behind the cemetery that stretched for a few miles. The path would split and go either deeper into the woods or up and to a street a few miles from where I lived.

I decided to visit these woods at around 2:00 a.m.. I had done this before and had zero fear about doing it. It did not bother me to be out at the cemetery at that hour. I left my house, taking a shortcut and soon was in the woods a little ways from the cemetery.

For some odd reason I decided to start a camp fire and started it in the middle of the trail. The trail was big enough for a car or truck to drive through. I dug a small hole, threw in some twigs and dried leaves. Started the fire. no big deal.

It was only a few moments later I had a wave of terror wash over me. It’s hard to explain how truly surreal the feeling was.

I somewhat heard the sounds of leaves being crushed by a foot step. But, this sound was very faint. It was also coming right toward me. I was frozen in panic and terror because if I ran whatever that was making the noise would hear me and I knew it would give chase.

I looked to my right and saw a huge oak tree. Rather massive. Almost the same time I saw this tree I heard a voice in my head.

I pushed the dirt into the small hole to put out the fire and then went behind the tree. I was opposite the path the footsteps were coming from. I was worried that once they passed the tree they would see me behind the tree. In almost perfect response to my fear I again heard the voice in my head tell me:

You will move when I tell you to move.

So, I stood behind the oak tree and waited. I then heard the footsteps come even closer as I knew whatever or whoever had finally arrived. They walked forward and I felt their presence as I was still bathed in dread. But, I was also curious. What was this thing I was hiding from. Could I maybe take a look at it. Just peek. Almost as quickly as I got the thought out of my head to peek, the voice in my head was very loud and firm:

So, I closed my eyes and concentrated. I blocked out the sound of the footsteps and waited for this voice to guide me. It wasn’t soon after I was commanded:

I stepped over a step. I made no noise. A second or so later again I was told:

I stepped another step over as the tree hide me from this night terror.

2 more times the voice commanded I move until I was hidden on the opposite side of the tree while the footsteps continued into the darkness toward the way I had walked to get to that point. I continued to wait until I could not hear the footsteps anymore. I followed the path the opposite direction until it opened up to the street. There was a main highway that connected here and would take me back to my house. After another 20 mins I was home.

I have never returned to those woods since that incident. I drove by the graveyard and there are gates and no trespassing on the old entrance to those paths.

I have absolute faith that the voice I heard in my head that night was God. I don’t know what I was saved from that night.

I’ve had a few comments suggesting this is a work of fiction. It is not and I have addressed these comments personally. I am flattered that some feel my writing is crafted so it does read as a work of fiction to them. I appreciate everyone who takes the time to read my work both non fiction and fiction.