Many Points Of Brilliant Lights 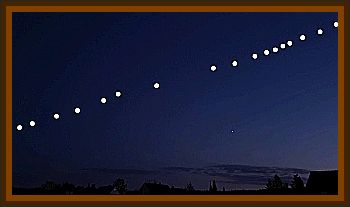 I had come home to that calm, starry night and, as I looked up at the sky, northeast to southeast, followed by many other smaller lights of all colors and shades, which ranged from bright red to blue/green. I do not remember the number of lights for sure, but I can tell you were more than ten brilliant points. The lights were foggy, as in a sign of neon, and they passed to impression of somewhat strange, unknown.

I started screaming for my mother, who was already asleep at that time, our little house was all dark.

The lights moved at low altitudes, I figured this because near there was a quarry of about 2,400' in height and the airport is relatively close and we could observe the airplanes when taking flight.

I imagined that the lights were moving at least 4,500' high, without any noise. Only my frightened cries broke the monotony of that hot night in Vitória, capital city of the Espírito Santo state.

The neighborhood where my mother lives today stayed in the island of Vitória, the place is called Joana D' arc.

In the following day, watching the important, National TV News, that covers all the cowntry, I remember of the announcer placarding the event in short and laconic form. He said in the note that the objects were observed observed moving from the north of Bahia towards Espírito Santo and Rio de Janeiro

I remember well that in the newspaper of the following day. Headlines alluded to the fact, and a note said that an inhabitant from the Mountain Range, a place called Serra, a neighboring city, that stayed in a plateau, to have observed everything of binoculars.

A few years later, as an adult, I was in the public archive of Vitoria, looking for newspapers of the day to make sure the day was correct, since I could not remember the correct date.. After much searching, I gave up and no longer tried.

Today, after so many years, I continue with the vivid memory of that night. What I observed was nothing like anything I had ever seen. That experience was very striking and decisive in my life. I read and I research everything that am able to do about these strange phenomena.

To this day I read and research everything I can about these strange phenomena.