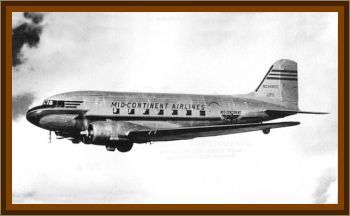 After Vinther’s Mid Continent Airlines DC-3 took off, he was asked by the tower to look for light, then while still in a climbing 360° turn at about 1,000' they spotted object to the NNW at about 8,000' and 4 miles away that looked like a B-29 fuselage with wings but no engines, which blinked some lights like running lights.

Object came at the DC-3, flew across the nose within 200', they had to turn their heads to follow it, then suddenly found it instantly appeared on the other side again, paralleled them for 2 or 3 seconds, then flew under them and disappeared in a few seconds to the NW.