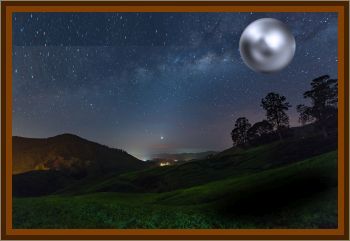 I am Valentinas Loukhniavitchous, Chief of Police in Vilnius, Lithuania.

Recently I had to appear on the radio to explain that two policemen, who had reported seeing something extraordinary, were known to me to be reliable witnesses and were of sound and honest mind. There has been considerable public anxiety about this matter, arising from what I consider to be media hysteria about their official report.

The two officers stated that they observed a round, shining object on the main Vilnius-Miadininkai route, at around half past midnight. 6 miles from the capital city near the village of Nemejis. The object was flashing bright light, and hovered 30' to 90' above the ground.

At the same time, you could hear a strange sound, like electricity crackling, they said.

The two men approached the UFO after watching it for almost half an hour. When they were some 150' from it, the object started to move upwards and away from them into the air, then accelerated towards Vilinius.

At that point an alert was put out and van loads of rapid reaction force police and tracker dogs arrived on the scene, but the UFO had disappeared. We conducted official tests on the area's ground composition, measured the air's radiation, and took sound recordings. The grass in the area for 30' around where the UFO was reported to have been sighted was visibly flattened.