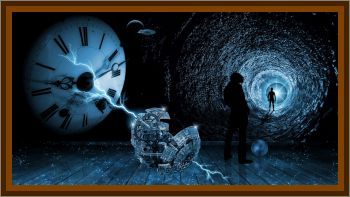 Time travel has always fascinated my wife. I'm interested, but on a different level. I don't understand it all to the point she does, So until I can order a Home Version from Amazon, Time Travel will be her Topic. After I'm finished with this of course, I get to show my knowledge, or lack of knowledge, in that area.

Here I go, either embarassing myself or finish looking good.

I read, or Google, that time travel may be theoretically possible, but it is beyond our current technological capabilities. That throws me for a curve, I think why do we need hardware or machinery to do this? I don't see it as driving from Miami to Seattle..I see it more like a Ghost or Shadow Being would move about.

Moving between different points in time has been a popular topic for science fiction for decades. My first experience with it was H. G. Wells, The Time Machine movie of 1960. That I thought was interesting. Since getting a few years older from first seeing it though, I've picked out a few flies in the ointmint.

I guess the first one would be the clock, for when you wanted to travel to. What if you set it for say the year 1,000,000 AD, hit the switch, and it turned out our sun went to Super Nova 100,000 years earlier, You're pretty screwed. Or the opposite, You chose 1,000,000 BC, and ended up in a lava flow or tar pit, or the belly of a dinosaur, sucks being you then. How about if you set it to say 4.54 billion years previous, when scientists assume Earth was created. It turns out the scientists were wrong, Earth was still a big vapor cloud, and your time machine brought you to the middle of nothing.

Some scientists who believe that time travel isn't at all possible and that any attempt would be fatal to any human who chooses to undertake it would be exactly right in the above scenerios. Or say you decided to just go back a few hundred years, Say the mid 1300s, Right in the middle of the Black Death, also known as the Great Plague, the Black Plague, or simply the Plague, it was one of the most devastating pandemics in human history, resulting in the deaths of an estimated 75 to 200 million people in Eurasia and peaking in Europe from 1347 to 1351. And bring that virus back when you return to your normal time. Or, being more down to Earth, set it for 1492, wanted to see Columbus set sail for the new world, But your instruments weren't calibrated too well, ended up in the mid 1300s...or in Nagasaki on August 9, 1945. I guess I'm just looking at the darker side of time travel.

They say time travelers age slower than their stationery counterparts, Would that mean you could go back say 4.54 billion years, and you would be a day or so younger as when you left? Or would it be years? Maybe even you would arrive as a piece of dust, long dead. That stuff about time bending light and all, is where I really get lost in the concept of Time Travel, just too deep for me.

I would never believe the stories I've heard/seen in say The Outer Limits, or The Twilight Zone, where you can go back and meet yourself. Or change the course of History. That concept just don't click in my head. I truly believe if I were a time traveller, and went back just 40 or 50 years, and met myself as a kid, or my parents, both of us would have some inkling that something is amiss. I couldn't say that if I were to meet a perfect stranger...Well known or not..Lincoln or Kennedy for example. Another thought... would I want to change History?

During my Googling sessions, it's presented that for time travel, either immense power would be required, or some type of vehicle, wether it be some single seat job like in the 1960 version of The Time Machine, Or the DeLorean DMC-12 used in Back To The Future. Or Hitler's Die Glocke, or The Bell?

I can't grasp that thought. Why wouldn't it be just as plausible to unleash the unused brain cells available? A Star Gate of sorts? Or Something similar to what was used in the short lived TV Series, The Time Tunnel? Even our government dallied in Time Travel, with the supposed Montauk Project. Who knows, maybe they are still messing with it.

I've watched old TV programs with many connections to time travel. Some indicate you are pretty screwed if you miss the period you are scheduled to return to your normal time. Or say if a bird, an animal or a insect would accidentally go through in your place.

I have absolutely no doubts time travel is possible, Just not by us at this time. I believe our alien visitors have mastered it, and use it.