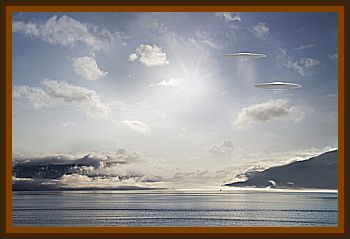 Going to the river Serchio before dawn to fish, Carlo Rossi saw hovering over it a circular object, apparently drawing up water through a long tube.

It was black, with oval openings around the edge, and in the center a transparent tower 20' in diameter and extending 10' below the disk. In this were 4 thin tubes attached to a central cylinder, and a bluish flame was passing between these tubes.

Under the disk were 5 equidistant propellers, and on top 3 concentric cones.

From a porthole in the turret a human face looked out, and stretched out an arm toward Rossi, who threw himself over the ridge of the bank. He saw a green ray projected above him, and felt an electric like shock. Then he saw the UFO depart at frightful speed.

2 months later, he encountered there a very thin & tall angler with a peculiar accent, who asked him if he had ever seen any sort of aircraft over the river, and gave him a peculiar cigarette that immediately made him feel faint. The stranger grabbed the cigarette from him, threw it in the river, & hastened away.